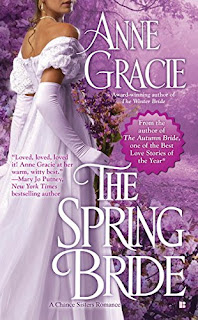 The first half of 2015 has certainly added some memorable keepers to my bookshelves, wooden and digital, with three historicals—Four Nights with a Duke by Eloisa James, It Started with a Scandal by Julie Anne Long, and The Spring Bride by Anne Gracie--at the top of the list. But the next six months offer a cornucopia of promising books for romance readers, some of which I expect to end up joining the books by James, Long, and Gracie on my Best of 2015 list. July through December, each month brings at least one historical romance novel that has me practically hyperventilating with anticipation. 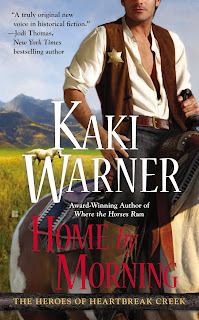 July 7 is one of those Super Tuesdays with so many romance releases that a reader hardly knows where to begin, but I await none with greater eagerness than Kaki Warner’s Home by Morning, the third book in her Heroes of Heartbreak Creek series.  Warner introduced two unforgettable mixed–race characters, Pru Lincoln and Thomas Redstone, back in 2011 in Heartbreak Creek, the first of her Runaway Brides trilogy. Fans have been waiting for their story ever since. Finally, four years and six books later, on July 7, their story will be available. I expect to stay up through the wee hours on July 6-7 so that I can start reading this one as soon as it downloads to my Kindle. If possible, PJ’s recommendation left me even more eager for Home by Morning. 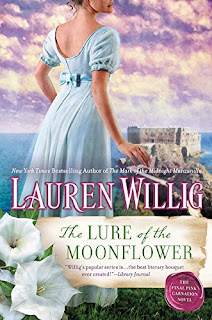 Just shy of a month later, on August 4, The Lure of the Moonflower, the concluding book in Lauren Willig’s popular Pink Carnation series will be released.  I have loved this series from the first book, and thus view the release of this twelfth and final book with mixed emotions. Of course, I am desperate to read this tale that pairs the Pink Carnation (Jane Wooliston) and the former French, now British, agent, the Moonflower (Jack Reid) in another of Willig’s superb blends of spy novel, romance, and comedy during the Napoleonic Wars within the frame of Eloise and Colin’s contemporary romance. Since 2004, the new book in this series has been a highlight of my reading year. I am sad to see the series end, but as I read the final pages of the final book, I shall take comfort in the fact that Willig has not ruled out future spinoffs. 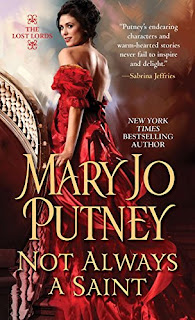 The last Tuesday in August brings the release of Mary Jo Putney’s Not Always a Saint, another book that concludes a series. The hero, Daniel Herbert, was introduced in Not Quite a Wife, the sixth of MJP’s Lost Lords books. I found him fascinating as a secondary character and have looked forward to seeing him as a protagonist ever since. How often do we see a hero who is an ordained Anglican priest, a trained doctor, and a reluctant lord? And his heroine is a wicked widow! An irresistible combination from one of my favorite authors, this one definitely belongs on my most anticipated list. Putney’s next series will begin with some spinoff characters from the Lost Lords books, so perhaps readers will catch a glimpse or two of favorites from the Lost Lords in the new series. 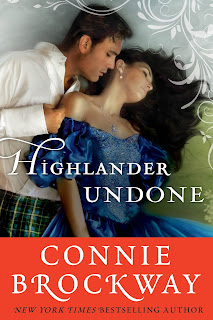 September brings a new book from Connie Brockway, always a reason for me to celebrate. Highlander Undone, a September 15 release, offers a hero who is a captain of Her Majesty’s Cormack Highlanders, a wounded, artist heroine, and a plot that includes traitors and slave traders. Obviously, Brockway is following last year’s delightful romantic comedy, The Songbird’s Seduction, with a darker story, but whether she chooses light or dark tones, Brockway’s books are always among those I look forward to with high expectations. 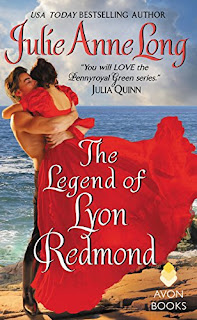 The end of September brings my most anticipated book of the year, Julie Anne Long’s The Legend of Lyon Redmond (September 29). I haven’t dared read the excerpts because I’m afraid doing so would heighten the anticipation to an unbearable point. The end of It Started with a Scandal left me pining for Lyon and Olivia’s story, hoping for a touch of Lochinvar, and keeping my fingers crossed that there will be some promise of happiness for Landsdowne too. And since Long’s comments suggest this series will end with this eleventh book, I also am really hyped to know the full story of the Redmond and Eversea parents. However, Long admits that she is reluctant to say this book marks a full end to the series. Perhaps some threads will remain loose until the author can take time from writing her first contemporary series (set in the California Gold Country and due for release in 2016) to complete some of the Pennyroyal Green novellas that are dancing in her head. Regardless, there are many reasons for me to be hungry for this book! 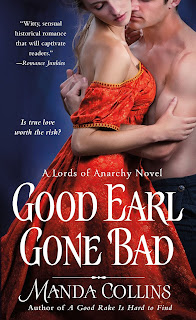 Most Romance Dish regulars know that Manda Collins has been a friend of mine (and of PJ’s) since we were all part of the Squawk Radio and Eloisa James bulletin board communities years ago. But I would be a fan of her blend of historical suspense and romance even if Manda Collins were only the author’s name on the books.  I thought the first book of her Lords of Anarchy series was superb. I finished A Good Rake Is Hard to Find primed for Lady Hermione Upperton’s story. A heroine whose driving skills make her the equal of the most notable whipsters of the day—sort of the historical equivalent of Diane Crump, the first female jockey to ride in the Derby—thrills my feminist heart. Learning that as the heroine of Good Earl Gone Bad (Lords of Anarchy #2), an October 6 release, Lady Hermione is also a murder suspect and partner in a forced marriage just adds to my eagerness to read this book. 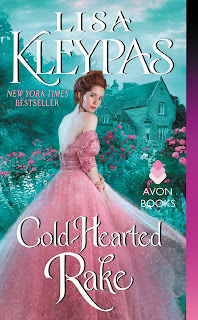 October 27 is a starred date on the calendar of many a historical romance reader, myself among them, because it is the release date of Cold-Hearted Rake, the first new historical from Lisa Kleypas since Love in the Afternoon more than five years ago. As much as I love Kleypas’s contemporary romances, I have missed her historicals. The cover copy describes the hero as “London's most wickedly charming rake” and promises the heroine is “a beautiful young widow whose sharp wit and determination are a match” for him. Then there’s that reference to “erotic seduction.”  And it’s Kleypas! Only 124 days (as I write this) until I will be reading this one. 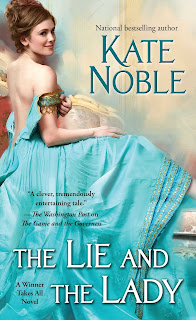 Kate Noble’s The Game and the Governess was one of my top reads of 2014. I turned the last page of that book already impatient for the story of John Turner, friend and secretary to Ned Granville, Earl of Ashby, who had played the earl in their game of deception. The Lie and the Lady, a November 24 release, is that story. Mere Mr. Turner again, John must win the heart and hand of the countess with whom he fell in love while disguised as a lord. The premise is exactly what I hoped, and I am increasingly impatient to read it. 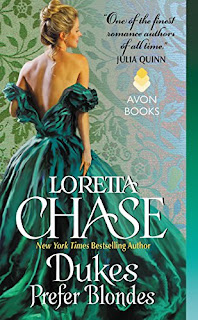 I love Christmas, and I have an extra reason for loving it this year. One of my Christmas presents to myself will be an already pre-ordered copy of Loretta Chase’s Dukes Prefer Blondes (Dressmakers #4), a December 29 release. Lady Clara Fairfax was the Duke of Clevedon’s intended bride in Silk Is for Seduction (2011), the first book in the Dressmakers (Noirot Sisters) series. I sighed happily when Marcelline Noirot married the duke and then I waited for Lady Clara to find her true love. I waited through Scandal in Satin (2012) and Vixen in Velvet (2014). Finally, just as 2015 ends, I will be reading Lady Clara’s story. I am intrigued by her hero, a “tall, dark, and annoying barrister” who “unexpectedly [finds] himself in line to inherit a dukedom,” and I am beyond eager to follow their journey from first meeting through inconvenient marriage to HEA. 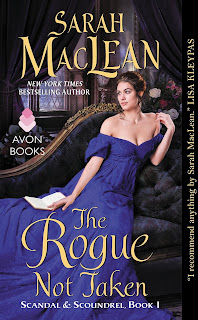 Another much anticipated year-end release is the first book in Sarah MacLean’s Scandal and Scoundrel series. The Rogue Not Taken, also a December 29 release, is MacLean’s first book post-Rules for Scoundrels, a series that made Chase’s identity one of the most discussed topics in the romance community. (PJ and I had our own discussion and developed a theory which subsequent books proved valid. Yay us!) That’s a tough act to follow, plus this is also MacLean’s first book after her open craniotomy.  But a book that features a roguish marquess as hero and a stowaway heroine who knocked her faithless brother-in-law into a goldfish pond on a road trip to the Scottish border sounds like a MacLean-style winner to me.  It’s reassuring to know that neither success nor surgery keep MacLean from giving her readers the kind of books that have made readers fall in love with her characters. I can’t wait for this one! 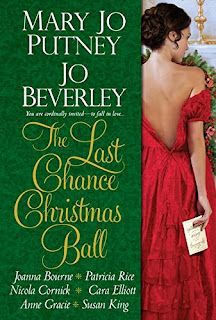 The final titles on my list are not novels. The Last Chance Christmas Ball, a September 29 release, is an anthology with eight novellas set at an 1815 Christmas Ball held at Holbourne Hall. Each story features characters who have “a last chance to find true love before the New Year.” Mary Jo Putney, Jo Beverley, Joanna Bourne, Nicola Cornick, Anne Gracie, Patricia Rice, Cara Elliott, Susan King, who blog as the Word Wenches, each contributed a novella to the anthology. This is the second Word Wench holiday anthology. The first, Mischief and Mistletoe (2012), was a keeper for me, and I expect this one to join it. A sure sign of how eager I am to read this book is that I pre-ordered it the day it first became available. How can I lose with Christmas stories by proven authors, including several auto-buy authors?


Jennifer Ashley’s A Mackenzie Clan Gathering is a novella that will be released on November 17. I count Ashley’s Mackenzie books among my favorite historical series and look forward to each new book, but Ian has remained my favorite Mackenzie. He and Beth are featured in this book, and that alone ensures this title a place on my list. The fact that the cover copy promises that readers can “catch up on the brothers and friends, their children, and their lives” just adds to my anticipation.

Then there are the contemporaries, but that’s another post.


What historical romances are you most anticipating?