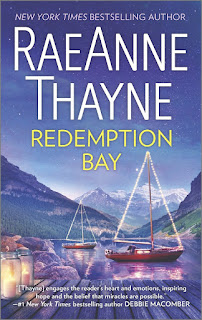 Between her flower and gift shop and her responsibilities as mayor of Haven Point, Idaho, McKenzie Shaw leads a busy life. Even though she enjoys her work and is committed to seeing her town prosper, she loves her time at the home she bought two years ago. She has worked to make it her place, a sanctuary for her and her favorite companion, her poodle Paprika, better known as “Rika.” McKenzie is most unhappy when her sister phones with the news that Ben Kilpatrick is back in Haven Point. She is even more unhappy when she finds that her sanctuary is threatened by the presence of Ben, the man she holds largely responsible for the economic decline her beloved town has gone through. He has rented the house next door. Rika may be delighted to welcome Hondo, Ben’s German shepherd, but McKenzie can’t even manage basic civilities when it comes to Hondo’s master.

Ben is in Haven Point under duress. His memories of growing up in the town are not pleasant. When he left after making the tough decision to close his family’s boat building business, he did not expect to return. He believed that he had cut his last ties to the town and his dark memories when he sold all the Kilpatrick properties to Aidan Caine. But Aidan has personal reasons for hoping Haven Point will prove suitable for an expansion Caine Tech is planning, a facility that would employ three hundred people, more than the number that lost their jobs with the closing of Kilpatrick Boatworks. As Chief Operating Officer of Caine Tech and Aidan Caine’s right-hand man, Ben has been given the task of conducting a feasibility study to see if Haven Point will serve the company’s purpose.

McKenzie immediately sees the proposed facility as the salvation of her dying town. She is determined to prove to Ben that Haven Point is the obvious choice. Ben’s logical mind, as well as his desire to escape the town, tells him to reject Haven Point as a site. However, he is impressed with McKenzie’s loyalty and determination. In fact, the more Ben sees of McKenzie, the more he likes what he sees, and he can’t forget her kindness to his younger sister when Lily was dying of Cystic Fibrosis. McKenzie’s memories are stirring too, and she remembers all too well the crush she once had on Ben. But shared moments and an attraction growing stronger with each meeting are not enough to resolve the conflict over the town. It takes a crisis to help Ben see the heart of Haven Point and for Ben and McKenzie to let down barriers and open their hearts to each other.

This second book in Thayne’s Haven Point series offers readers complex characters in a charming but credible setting and an emotionally satisfying story. Ben and McKenzie both have complicated histories, and Thayne allows the reader to see how those histories have shaped them into the multi-layered characters they are. They are stubborn, independent, and reluctant to examine too closely the scars they bear. I was particularly interested in the fact that their similarities as well as their opposing views of the town are part of what they have to overcome in order to reach their HEA. A big part of the appeal of Thayne’s novels is that her characters possess a high degree of verisimilitude, and that certainly holds true for the characters in this book.

Ben and McKenzie’s story develops against the backdrop of community and is interwoven with threads from the stories of family and friends. The mix makes for a rich reading experience. The redemption theme that was introduced in Snow Angel Cove is even stronger in this book, as the title suggests. I’m interested in seeing if it runs through the series. The Haven Point series has not yet reached the favored favorite status that belongs to Thayne’s Hope’s Crossing series, but it is headed in that direction. I am already looking forward to another visit to the town in late September when Evergreen Springs, the story of Devin Shaw, McKenzie’s sister, is released. That it is a Christmas story makes me anticipate it all the more. If you are a fan of small-town romances with a large cast of characters who leave you wanting more, you should add the Haven Point series to your TBR list. If you start now, you can read Snow Angel Cove and Redemption Bay and be ready for Devin’s story on September 29.