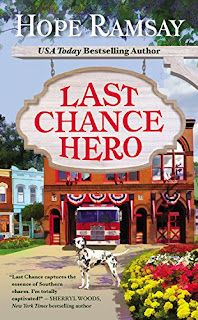 Once upon a time a house fire changed the lives of two sisters. Sabina Grey, a cheerleader overly concerned about her cool factor sneaked out to go skinny dipping with her friends rather than staying home to babysit her younger sister. Lucy Grey was trapped in the burning house and badly burned. Sabina, guilt-ridden over her sister’s suffering, makes Lucy the focus of her life, sacrificing her dreams to see that Lucy’s every wish is satisfied. After a long recovery that included an extended hospital stay and multiple surgeries, Lucy has become obsessed with controlling her life. She plans her future in the minutest detail, and she is shattered when anything puts her plans in jeopardy.

Ross Gardiner, chief of Last Chance’s fire department and the only trained, salaried member of the otherwise volunteer force, had hopes of gaining the attention of his high school crush, Sabina Grey, when he returned to his hometown after his divorce. However, Sabina not only turned him down repeatedly, but she also pushed him to notice her sister Lucy. Eventually giving in, Ross asked Lucy out, and the two begin a steady relationship that is safe and comfortable even if it lacks magic. Such has been the situation for eighteen months.

Miriam Randall, the town’s phenomenally successful matchmaker, serves as the catalyst for change when she informs Sabina that she needs to get out of Lucy’s way in order to clear the path to Sabina’s own happily-ever-after. An unexpected encounter with a former classmate makes Sabina wonder if Miriam is right, and the Grey sisters’ mother, a Texas version of Austen’s Mrs. Bennet, pushes for Lucy and Ross to marry.

Everyone seems caught up in things they cannot control. The chaos and confusion intensifies when a series of house fires are started in Last Chance, and Lucy seems to be the number one suspect. Even when the fire between Sabina and Ross burns as hotly as those destroying homes and Lucy is beset by doubts, it seems no one can stop the wedding the whole town is anticipating. Can the Grey sisters heal from old wounds and opt for honesty before it is too late? Which sister will be Ross’s bride?

Last Chance Hero is the ninth and final novel in Ramsay’s Last Chance series which debuted more than four years ago. I have found this series uneven. Some books I have fully enjoyed (Last Chance Book Club and Last Chance Family, to name two), but others have inspired a less than enthusiastic response. This one falls in the latter group. I never became fully engaged with these characters, and the matchmaking, which I have found amusing in other Last Chance books, just seemed tired. Miriam’s decline made me sad. Sparky the dog was my favorite character.


The warmth and mostly well-intentioned interference and the quirky cast of townspeople that have been characteristic of the town in earlier books can be found in Last Chance Hero. For fans of the series, that may be enough to earn the book higher marks. For me, it was a disappointing conclusion to a series that I have generally liked.

~Janga
Posted by pjpuppymom at 8:13 AM