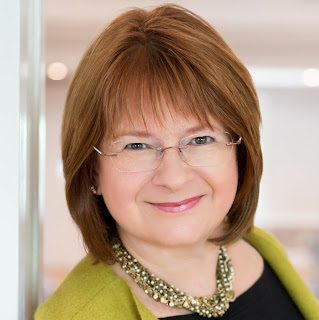 Nancy Herkness is the author of the award-winning Whisper Horse series, published by Montlake Romance, as well as several other contemporary romance novels.  She is a two-time nominee for the Romance Writers of America’s RITA® award. Her new series, Wager of Hearts, follows the romantic adventures of three very wealthy men who make a life-changing bet.


Nancy is a member of Romance Writers of America, New Jersey Romance Writers, and Novelists, Inc. She has received many honors for her work, including the Golden Leaf Award, the Maggie Award in Contemporary Romance, and the National Excellence in Romance Fiction Award.  She graduated from Princeton University with a degree in English literature and creative writing. A native of West Virginia, Nancy now lives in suburban New Jersey with her husband, two mismatched dogs, and an elderly cat.


PJ: Welcome, Nancy! It’s a pleasure to have you visit with us today. Your new contemporary romance, THE CEO BUYS IN will be released July 21 and kicks off your Wager of Hearts series. Please tell our readers what they can expect from the series and from this story.

NH: PJ, it’s such a pleasure to be here on The Romance Dish. My readers tell me this is where they look for all the best in romance, so I am thrilled to chat with you.

My new Wager of Hearts series follows three billionaires—a powerful CEO, a celebrity quarterback, and a bestselling novelist—who find themselves drinking together one night. They realize they have much in common: modest backgrounds, dazzling wealth, and a lack of real love in their lives. Tired of being pursued for their money and power, the billionaires make a high-stakes wager. To win, they must find women who love them for the men they are, not their market portfolios.

My upcoming release, The CEO Buys In, introduces all three heroes in the prologue, which repeats in the next books in the series but is told from a different hero’s point-of-view each time. It has been such a fun writing challenge!

In The CEO Buys In, self-made billionaire Nathan Trainor feels restless and disillusioned. His 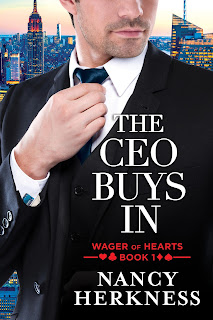 company may be thriving, but he can’t find a woman who sees him for more than his wealth. With his love life in the red, he meets the two other billionaire bachelors at the ultra-exclusive Bellwether Club and makes his wager of the heart.

Savvy office temp Chloe Russell is trying to scrape together the money she needs to support her grandmother. So when a flu epidemic strikes Trainor Electronics and she’s promoted to Nathan Trainor’s assistant, she jumps at the lucrative opportunity. But then Nathan himself falls ill, and he and Chloe must work from his penthouse while he recuperates. Before long, it’s clear there’s genuine heat between them, and it’s more than just a fever spike. Will Nathan win Chloe’s heart—and the bet? Or will their differences destroy any chance for love?

PJ: Why billionaires? What makes them intriguing to you as a writer?

NH: Funny you should ask! I am curating a post for USAToday’s HEA blog on exactly that topic. To me, billionaires make great romantic heroes because they have this vast array of resources—money, power, influence—which they fully exploit to court the heroine, who generally has very limited resources. That’s pretty darned sexy and romantic because it’s so over-the-top.

The inequality also creates great conflict. The hero and heroine come from such different places so there are always fundamental questions: Does she love me only for my money? Is he just slumming because he’s bored? Is the power dynamic too uneven to make this relationship work?

PJ: I loved the conflict caused by that inequality in The CEO Buys In. Nathan and Chloe have lifestyles that are so far apart they could be on separate planets. Without the extraordinary circumstance of his illness, they most likely would never have connected on a personal level. What is it about these two characters that convinced you they could overcome their differences to find happiness together?

NH: Chloe has a little bit of a chip on her shoulder about large corporations, so although she understands how impressive Nathan is, she isn’t intimidated by him. Because Nathan is a self-made billionaire, he admires hardworking, capable people like Chloe. But what draws them together is what they offer to each other. Nathan proves to Chloe that not all CEOs are motivated by profit over the good of their employees. Chloe helps Nathan establish a meaningful relationship with his difficult father. They connect on both professional and emotional levels.

PJ: I love how practical, no-nonsense Chloe gets giddy over a pair of great shoes. What’s your guilty pleasure?

NH: Shoes! That’s one of the fun things about being a writer: you can live vicariously through your characters. I even have a Pinterest board of my fantasy shoe closet which I developed while looking for Chloe’s shoes. My biggest problem with beautiful shoes (besides budget)? I can’t wear those sky-high heels; I would break my ankles. But my heroines have strong leg muscles and great balance so they have no problem walking in Louboutins (when a billionaire buys them a pair).

PJ: When I want my favorite food I head to a local restaurant or, more frequently, into my own kitchen. Nathan is a bit more creative as illustrated during his lobster date with Chloe. If you had a dinner date with a billionaire who had a personal jet at his disposal where would you have him take you and what would be on the menu?

NH: I am going to jump straight into cliché and say Paris.  I mean, the man has a jet so why wouldn’t I go to the most romantic city in the world with him? As for the menu: Dom Perignon to drink and a fabulous pastry—or maybe two--for dessert. I don’t really care what else I eat. LOL!

Nathan and Chloe are both surprised by things they learn during their journey to love. What have you learned during your writing journey that has most surprised you?

NH: How generous and helpful my fellow romance authors are! I am always amazed and awed by the way romance writers share their experience, their expertise, and their contacts with each other. I have heard this is not typical of other genres where such information is carefully guarded. Not in romance! We are a community in the best sense of the word; we pay it forward all the time.

PJ: Congratulations on receiving your second consecutive Romance Writers of America RITA® nomination (for The Place I Belong in the Long Contemporary category). How exciting to have your writing honored two years in a row! Will you tell us a bit about the book? 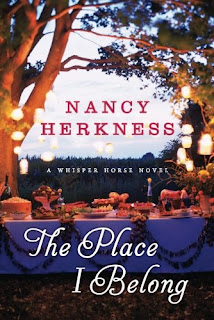 NH: Thank you so much! I have been thrilled and quite surprised to be nominated twice in a row. Who’d have thought? Both nominations were for books in my Whisper Horse series which takes place in the mountains of West Virginia, where I grew up.
This year’s nominee, The Place I Belong, tells the story of veterinarian Hannah Linden and world-famous chef Adam Bosch. Fleeing professional scandal and a broken engagement, Hannah abandons Chicago for the mountain town of Sanctuary, West Virginia, hoping to put her troubles with men and the media behind her. But when she encounters Adam, she finds herself increasingly drawn to the charming but darkly complex man and his troubled teenage son, Matt.  Adam, a recovering alcoholic, fears he can never be a worthy father to the surly, distant boy he has just come to know, and enlists Hannah’s help in his struggle to connect with his son.

Hoping to coax Matt out of his shell, Hannah introduces the boy to an ailing brown pony who has the power to change his view of the world. But can the determined little whisper horse prove to Hannah, Adam, and Matt that they were meant to be a family?

It’s one of my most emotional books ever. There are several scenes that make me cry when I read them!

PJ: It sounds wonderful. I'm off to download a copy!

Will you be signing at the July 22nd “Readers for Life” Literacy Autographing in New York City?

NH: Yes, I will be there and hope to see lots of my wonderful readers! I will be signing both The CEO Buys In (hot off the presses since its release date is July 21st) and my 2015 RITA®  finalist The Place I Belong.

PJ: What’s next for our wagering billionaires?

NH: Next up in the series is Luke Archer, the legendary quarterback for the New York Empire football team. He doesn’t believe in having a relationship during football season, so he fights his attraction to concierge Miranda Tate with every ounce of his steely willpower.

Miranda works with the spoiled rich and famous, catering to their every whim, so she’s pleasantly surprised by Luke’s innate decency and, even more, by the vulnerability he reveals to her and her alone. But she knows their relationship expires as soon as Luke goes back to playing.

Of course, you get to see Nathan from The CEO Buys In in this book, but from Luke’s perspective. And Gavin Miller, the third billionaire, makes his usual trouble-stirring appearances.

I am having a blast writing this book. Elite athletes fascinate me because of what they have to give up in order to succeed in their field. And, of course, how hot they are.

PJ: Thanks for visiting with me, Nancy! Would you like to ask our readers a question?

NH: Many thanks for inviting me to meet your readers! It has been a delight to answer your thought-provoking questions.

My question for your readers is: Georgette Heyer is the author who inspired me to become a romance writer and I re-read her books often. What author and/or book do you re-read on a regular basis?

One person who leaves a comment on today's post will receive an autographed copy of The CEO Buys In. (U.S. only)