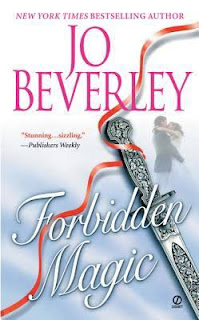 Shortly after I received news of Jo Beverley’s death on May 23, I moved all the Beverley books not on my Kindle from my keeper shelves to my reread shelf and planned a Jo Beverley Reread Marathon of print and digital books as my personal tribute to an author whose books had kept me falling in love with her fictional worlds for more than twenty-five years. I decided then that I would focus on a Jo Beverley book for June’s On Second Thought, but how could I choose one book? Just considering my all-time top 100 list left me with ten Jo Beverley books. I chose Forbidden Magic because it is a rare standalone and thus without the tight ties to other books that link favorites in the Rogues World (seventeen books from An Arranged Marriage in 1990 through The Viscount Needs a Wife in 2016) and the Malloren World (thirteen books from My Lady Notorious in 1993 to Seduction in Silk in 2013) or even the looser links among her traditional Regencies from early in her career. I also think Forbidden Magic is an underappreciated gem that is often forgotten when Beverley books are discussed.

The death of her parents has left Meg Gillingham, daughter of a gentleman scholar and a former governess, facing a penurious Christmas Eve with no means of supporting her four younger siblings. Eviction is staring her in the face in the form of her landlord and the obsequious beadle accompanying him. Meg is desperate enough to have talked herself into accepting a marriage proposal from the oily landlord, Sir Arthur Jakes, if he offers, but twenty-one-year-old Meg is too old for Sir Arthur’s taste. He now prefers her younger and more beautiful sister, fifteen-year-old Laura, and his offer is for her to become his mistress, not his bride. Meg is sickened by his offer--sickened enough to use the sheelagh-ma-gig, a pagan wishing stone that grants the wishes of women in Meg’s family who inherit the gift. Meg has inherited the gift, but she understands that the stone’s power is mischievous, granting the wish but always exacting a cost.  Fearfully, Meg touches the stone and makes her wish: “I wish . . . that within the week, we all be provided for as befits our station, and with honor and happiness.”

One day less than a week later, the Earl of Saxonhurst, familiarly known as Sax, awakens to a written reminder from his greatest enemy, his maternal grandmother, the Duchess of Daingerfield, of a promise Sax made five years ago--if he remained unmarried on his twenty-fifth birthday, his grandmother would choose his bride. Sax’s birthday is December 31. He has one day to find a bride. A maid in his unorthodox household is the sister of a former maid in the Gillingham household and knows of Meg’s plight. On the toss of a coin, Sax sets things in motion to marry this unknown miss and thwart his grandmother’s plans. The maid’s task is to approach Meg with Sax’s offer. The next day Meg becomes the Countess of Saxonhurst by special license, and she and her siblings move into Sax’s London house.

Sax is handsome and charming, although eccentric. Meg is thankful and charmed, although bewildered. Her pleasure in her new life is marred by the guilt she feels because she believes the sheelagh has forced Sax to choose her as his bride and fears Sax will think he was trapped if he learns of the magic. Terror is added to the mix when she finds that the Shelagh, left behind in the Gillingham’s hasty move, is now in the hands of Sir Arthur whose lust for Laura persists. And then there is the deranged, duplicitous duchess to further complicate the road to an HEA.

This book is a joy. Meg is a rational young woman confused by a world in which emotions compromise reason and magic comes with consequences that cause her to doubt herself. She is willing to sacrifice herself to protect her brothers and sisters. I love that her wildly embroidered underwear undercuts her serious, somber façade. Sax is a delight. Some historical heroes collect art, some collect rare books, and some collect gambling debts. Sax collects misfits. Except for his tangled relationship with his grandmother, he is a man of extraordinary tolerance and compassion. The secondary characters are also wonderful. I adored Meg’s siblings and Sax’s servants, but the misogynistic parrot Knox who shrieks, “Women, women, road to hell - Eve, Delilah!” at the sight of a woman may be the most memorable.


I highly recommend Forbidden Magic. It is the funniest of Beverley’s novels, and the one most imbued with magic other than the author’s splendid gifts. If you are a Beverley fan who somehow missed this book, you have a treat in store. If you love historical romance and have never read Jo Beverley, you owe it to yourself to read this RWA Hall of Famer and one of the genre’s legendary and most beloved authors. This standalone works well as an introduction to an amazing oeuvre. I’m grateful that there will be one more Jo Beverley book. Whatever world it is set in, I know it will enrich my world.


Tell us about your favorite Jo Beverley novel.
Posted by pjpuppymom at 12:00 AM