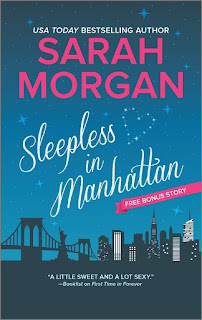 Paige Walker loves her life in New York City. After a childhood and adolescence restricted by a heart defect and an ultra-protective family and community, she is finding independence heady. Sharing it with her long-time best friends Eva and Frankie makes it even better. Paige is anticipating a particularly exciting day because she believes she is about to be rewarded for all her hard work for Star Events. Instead of the promised promotion, she, along with Eva and Frankie, is fired by her bitch of a boss. The rooftop party that was supposed to be a celebration is in danger of turning into a pity party until Jake Romano, best friend of Matt, Paige’s brother, suggests the three friends start their own company. Initially intimidated by the idea, Paige is challenged by Jake’s prodding, and soon she and her besties are planning the startup of Urban Genie, their new event concierge service.

It turns out that the planning is easier than the execution. Clients are not exactly flocking to the doors of the new business. Eva and Frankie push Paige to seek advice from Jake, a tech genius and owner of an immensely successful business, but Paige is reluctant. As a teenager, she was convinced that she and Jake intuitively understood one another and were destined to be together, but ever since one memorable occasion when a literally bare and vulnerable Paige offered herself to Jake only to be rejected, the two have been uneasy with each other. The former tenderness with which Jake treated her has been replaced with edgy repartee. But Paige decides her friends’ financial stability is more important than her pride and approaches Jake.

Jake is eager to help, not stopping with advice but hiring Urban Genie for an event he is hosting that will give the new business priceless exposure to the kind of clients they want. He also agrees to provide them with office space in his building, a generous offer but one that adds a complication. Paige has accepted that Jake is a perennial bachelor who enjoys his flavor-of-the-month relationships, and Jake has kept his feelings for her in check by taking Matt’s warning to avoid a romance with Paige as an absolute rule governing his behavior. But working in the same building throws them together more often, and one evening close contact in an elevator erodes the barriers they have constructed. Their chemistry is undeniable, but can sizzling attraction become a forever love?

Sleepless in Manhattan is the first novel in Morgan’s From Manhattan with Love series, and based on this beginning, I predict this series will win more followers to the Sarah Morgan camp. Morgan makes it easy to fall in love with her characters. They are interesting people with mixed histories, layered personalities, and appealing credibility. The three-friends trilogy is an established convention in romance, but in Morgan’s capable hands it becomes much more than the some old same old. The three women are distinctive individuals. Paige is the organized, take-charge leader who feels responsible for everyone. Eva is a tender-hearted romantic, and Frankie is a porcupine who is wary of almost everyone. Their differences complement rather than complicate their friendship and their business. The long history they share from their Puffin Island days makes for intense loyalty and sympathy with one another’s quirks. The friendship between Jake and Matt is also integral to the story.

Readers who have grown tired of small-town settings will find the city background in this story refreshing, and because it is New York City, most readers will feel a certain familiarity even if it is only through books read and movies viewed. The Puffin Island tie-in also maintains a bit of small-town feel even in the urban setting.

This author successfully uses the novel to introduce the world of the series without sacrificing the central place and power of the romance. I found the romance totally satisfying. The scenes from Paige and Jake’s past are heart-melting, and the love scenes have both heat and heart. Paige is likeable with sufficient imperfections to keep her believable. Jake is much more than just another super-rich hero. The story of how he achieved his wealth is interesting, and his personal history evokes sympathy as well as revealing the tenderness and loyalty that are part of his identity.

Sarah Morgan is one of a select group of authors who joined my auto-buy list with the first book of theirs I read. In this case, it was Sleigh Bells in the Snow, the first of the O’Neil Brothers books. I haven’t missed one of Morgan’s single-titles since, and I’ve read several of her short categories, beginning with the RITA-winning, Anna Campbell-recommended Doukakis’s Apprentice. Sleepless in Manhattan reminds me anew that I made a smart choice when I started reading Morgan’s books. If Sarah Morgan is new to you, this book is a great place to begin. I recommend you check it out. You may also be interested in the novella Midnight at Tiffany’s; it introduces the world of the From Manhattan in Love books. And put Frankie and Matt’s story, Sunset in Central Park, on your calendars. It will be released on August 30.