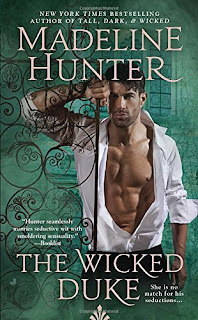 Lancelot Hemingford, Duke of Aylesbury, has grown bored with the quiet, isolated life his brothers have insisted he lead since the death of their older brother and the widespread suspicion that Lance was responsible for the death of his predecessor. Staying out of London, for the most part, and refraining from his usual debauched behavior, more or less, has done little to alter his reputation as “the wicked duke.” His problem grows more complicated when blackmail is added. A neighbor, Sir Horace Radley, informs Lance that there is a witness willing to testify that Lance had opportunity to poison his brother. A history of animosity between the brothers and the wealthy dukedom Lance inherited at his brother’s death provide motivation. Lance recognizes that he could be hanged. Radley, a Justice of the Peace, guarantees the silence of the witness and official exoneration for the new duke if Lance agrees to marry Radley’s niece.

Marianne Radley is uneasy when her uncle summons her, her mother, and Nora Radley, her uncle’s daughter, to join him on the estate he inherited from Marianne’s father. Her mother is delighted to return, happy to take charge of her widowed brother-in-law’s household and to have greater access to his purse. Marianne, however, is suspicious of her uncle’s motives. The change in location also makes it more difficult for her to continue the writing she has been doing under a male pseudonym and threatens the modicum of independence she has won. She is not prepared for the story her uncle shares with her about the incident that led to Nora’s illness and disturbed state, and she is horrified to learn her uncle’s plans for his daughter to marry the duke, an act that will satisfy his need for revenge and his social ambition. When Radley is forced to admit Nora’s unsuitability for marriage, his plan centers on Marianne.

An attraction has simmered between Lance and Marianne since their first meeting, but the distrust between them persists. Lance suspects Marianne is party to her uncle’s blackmail, and Marianne believes Lance is even more wicked than his reputation. Pressured into marriage, they find the attraction irresistible, and less predictably, they begin to genuinely like one another. Determined to find the true murderer, they work together. But will the answer they seek open the way to an HEA or end the joy they have found in marriage?

This is the conclusion to Hunter’s Wicked trilogy (following His Wicked Reputation and Tall, Dark, and Wicked), and readers who have fallen for Lance in the earlier books will be delighted to see him absolved of murder charges and get his own sexy, romantic match in this final book. Lance and Marianne are both intriguing, complicated characters. Hunter succeeds in making the reader like Lance without whitewashing his character. He has led a debauched life, but the debauchery is balanced by his adherence to his own code and his love and loyalty to his younger brothers. Marianne is that heroine too rare in romance fiction, a woman of courage and honor who longs for independence and achieves it to a limited degree while at the same time acknowledging the limits her world imposes on her.

The secondary characters are also deftly developed. I found Sir Horace particularly interesting because Hunter portrays him as an unpleasant sycophant who does not hesitate to use his daughter for his purpose. He says when Marianne protests his plan for Nora, “What she wants does not signify. This is a matter of family honor.” At the same time, his horror at the destruction of Nora’s innocence and his need to avenge her seem authentic.

The mystery is handled skillfully. Avoiding spoilers limits my comments, but I will say that it was very late in the novel before I suspected the murderer’s identity. And I was totally satisfied with the conclusion to the mystery and the romance. The former raises some provocative questions about justice and law.

The Wicked Duke is a worthy conclusion to one of the best series from this talented author. I highly recommend it. And if Tall, Dark, and Wicked remains my favorite of the three books, it likely says more about the heroes who win my heart most easily than it does about the relative merits of the books. The entire trilogy rests on my digital keeper shelf, and I look forward to what Hunter has in store next for her readers.