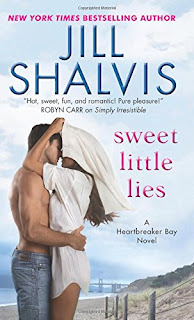 I have a confession: I’m typically not a fan of books with “lie” or “lies” in the title. I suppose that stems from the fact that I don’t particularly care for stories where one of the leads withholds the truth from the other. And it’s only natural to assume that with “lie” or “lies” in the title, someone is holding on to a big, fat lie. (Though, yes, sometimes keeping a lie—big or small—is justified.) Having said that, I am a fan of books by Jill Shalvis, so I was certainly willing to give Sweet Little Lies a chance. I’m so glad I did. *grin*

Pru Harris is captain of a day cruise ship in the San Francisco Bay area. Since her parents died when she was nineteen, Pru has been somewhat of a loner. After she moves into her new apartment, she meets a few people who quickly welcome her into their circle. One of those people is Finn O’Riley, the owner of the pub next door. It doesn’t take long for Pru to find it difficult to think of him as only a friend. After all, he is a hottie and a really nice guy. She wants only the best for Finn, so she makes a wish for him when throwing a coin into the courtyard fountain. Unbeknownst to her, Pru gets more than she bargains for!

Sweet Little Lies is the first of a new series and a terrific contemporary romance! It contains Shalvis’s trademark snappy dialogue and characters you fall in love with set in the big, beautiful city of San Francisco. I absolutely love Pru. She is such a selfless person that you can’t help but root for her. The fact that she’s never had a really close relationship fuels her insecurity that she might be unlovable. Oh, how my heart went out to her. It’s not hard for readers to fall in love with Finn. He owns O’Riley’s with his younger brother, Sean. Finn raised Sean after their father’s death, and he gave up a lot in order to do so. Finn is responsible and steadfast, while Sean is carefree and easygoing. Finn is the kind of guy you can rely on and wouldn’t hesitate to give you the shirt off his back. It’s no wonder Pru makes a wish for him!

I also love the close group of friends. They are so incredibly likeable and funny that, at times, I was reminded of one of my favorite TV shows, Friends. I look forward to their stories in upcoming books. Adding to the humor is the homeless Old Guy and Pru’s neighbor, Mrs. Winslow. Oh my goodness, I found myself laughing out loud repeatedly! (Side note: I read much of this book while my family was on vacation. My husband did a lot of driving, so of course, I read. I lost track of how many times I received funny looks from him when I busted out laughing.) Throw in a cute mutt named Thor, a crazy game of darts, and perfectly worded hashtag epigraphs with each chapter, and you’ve got yourself a winner. Don’t miss out on this one!