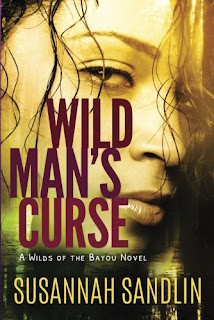 The bones said death was comin’, and the bones never lied.
While on an early morning patrol in the swamps of Whiskey Bayou, Louisiana wildlife agent Gentry Broussard spots a man leaving the home of voodoo priestess Eva Savoie—a man who bears a startling resemblance to his brother, whom Gentry thought he had killed during a drug raid three years earlier. Shaken, the agent enters Eva’s cabin and makes a bloody discovery: the old woman has been brutally murdered.
With no jurisdiction over the case, he’s forced to leave the investigation to the local sheriff, until Eva’s beautiful heir, Celestine, receives a series of gruesome threats. As Gentry’s involvement deepens and more victims turn up, can he untangle the secrets behind Eva’s murder and protect Celestine from the same fate? Or will an old family curse finally have its way?

Celestine "Ceelie" Savoie left Louisiana as soon as she could, heading to Nashville to seek a career as a singer/songwriter. Unfortunately, that hasn't exactly gone as she'd hoped. She's unemployed, broke, and about to be homeless when she receives word that her great-aunt has been murdered and Ceelie is her only living relative. Whiskey Bayou is one place she thought she'd never see again but, once there, she begins to remember how much she loved spending time there as a child and the lessons she learned at Eva Savoie's knee. Life on the Bayou begins to cast its spell over her once again but someone wants her out of Eva's cabin and it appears that person will go to any lengths to make it happen...even murder.

Gentry Broussard is one of the good guys. He lives on the right side of the law which, unfortunately, put him in the position of having to make a split decision that tore his family apart. It haunts him still. He discovers Eva's body but, as a Wildlife officer, isn't officially attached to the case. However, what he witnesses at the scene has him wondering if he's seen a ghost and when Ceelie is threatened, he can't stay away. The more time they spend together, the closer they grow but Gentry is a man whose entire life in on the Bayou, Ceelie is a woman who only wanted to escape, and somewhere out there another person lurks who wants to see both of them dead.

Wild Man's Curse is the first book by Susannah Sandlin that I've read. I'm here to tell you, it will not be the last. Wow, what a ride! I wanted to read it slowly, savoring each word; absorbing the steamy, mystical, sometimes sensual, sometimes sinister life on the Bayou while at the same time, racing through the pages to discover what awaited around the next turn. Sandlin paints a vivid picture of life on the Bayou and the people who call it home. I could feel the cloying heat and humidity, hear the lapping of the water, the buzzing of insects, and the soft whir of trolling motors as the good guys - and the bad - navigate the waterways. She brings her characters to life as well; developing them with a deft hand and allowing readers to come to know them gradually, as one would in real life. Sexual tension sizzles between Gentry and Ceelie but the romance develops slowly, realistically, in a believable and emotional way that I enjoyed and appreciated. The secondary characters are also well developed, actively contributing to the story and setting the stage for future books in the series. And the villain? Well, let's just say I did not sleep easily after turning the final page of this book long after my bedtime.

I highly recommend Susannah Sandlin's Wild Man's Curse and am anticipating future books in this series with great enthusiasm. I've already pre-ordered the next book, Black Diamond, scheduled for an October 2016 release.

Tell me about the last book that kept you up long past your bedtime.

I have a print copy of Wild Man's Curse for one randomly chosen person who leaves a comment on today's post. (US only)