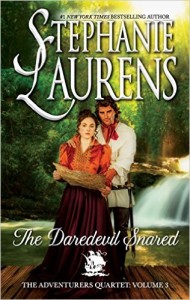 Although he captains his own ship, as the youngest of four sons, Caleb Frobisher is still considered the reckless baby of the family by his older brothers and, as such, has been excluded from the more dangerous assignments taken on by his family in support of the Crown. Caleb is determined to prove that he has the skill and maturity to handle any mission on the table. The third leg of the government's covert plan to shut down an illegal diamond mine in Africa and rescue the kidnapped men, women, and children who have been forced into slave labor there should suit his purposes perfectly.

Traveling from England to Africa, Katherine Fortescue has settled into her new role as governess for a Freetown family when she disappears. Kidnapped by mercenaries and taken deep into the jungle, Katherine is held prisoner along with other men, women, and children who are forced to work a secret diamond mine. Katherine's role, along with cleaning and sorting diamonds, is to oversee the children of the camp and keep them in line. Outwardly, she appears to have accepted her captivity but underneath that calm exterior flows a deep determination to find a way out...for all of them. When the mercenary in charge agrees to allow Katherine to accompany a young boy outside the camp to gather nuts she encounters Caleb and members of his crew who have been secretly observing the camp.

Caleb's orders are to locate the mine then return to England where the fourth segment of the Crown's plan - a rescue - will be put into effect. Katherine and her fellow prisoners are determined to stay alive long enough to see that plan happen. Unfortunately, the sadistic mercenary running the camp is determined to see both of their plans derailed.

The Daredevil Snared is a much slower-paced novel than the one that precedes it though no less necessary. Think of it as more of a chess match than a sword fight. There are several new characters introduced and, in some ways, it feels like the introduction to a new series rather than the third installment. However, it does move the overall series arc forward and more information is revealed surrounding the mystery of those who are behind the kidnappings and the mine. In Caleb and Katherine, as well as their fellow prisoners, Laurens has created characters that intrigued me and for whom I came to care as I began to know them. And while the action is not as fast-paced nor the tension as "in your face" as the previous book in the series, the more subtle evil of their captor and the certainty of what awaits when there are no more diamonds to mine brings a chilling effect to this third story in The Adventurers Quartet.

The books in this series do not stand well on their own. Each book builds upon the previous one and I strongly recommend reading them in order.

Are you reading The Adventurers Quartet?

Do you enjoy historical romances set outside Great Britain?

Do you like trilogies or quartets with an overarching mystery that isn't solved until the end of the series?