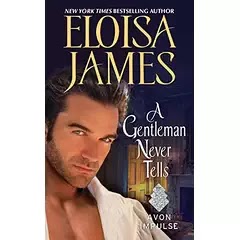 Once upon a time, Lizzie Troutt was a young woman filled with hopes and dreams. Those dreams were dashed when the man her father forced her to marry deposited her at his mother's home an hour after their wedding, informing her that her duty would be to care for his mother while he lived in another home with his mistress, Shady Sadie Sprinkle. Five years later, to put an exclamation point on the whole sordid affair, he had the audacity to die in the woman's bed, leaving Lizzie a humiliated, disillusioned, virgin widow determined to never marry again. Eighteen months later, Lizzie's happily married sister convinces her to visit them in the country where she hopes to lure Lizzie away from the books she hides behind and back into the world. Where, hopefully, she can meet a man who will convince her that not all males are cut from the same cloth as Lizzie's despicable husband.

Eighteen years ago, the Honorable Oliver Berwick was not the most considerate of young men, running with a group whose leader considered it fashionable to affix unflattering labels to young women who were not the Ton's beauties. In the intervening years, Oliver has matured and now deeply regrets his part in hurting the feelings of those young woman who were the butt of their jokes. If fact, according to his 15-year-old niece Hattie, who is living with Oliver while her missionary parents are abroad, he's become a "stodgy old twig." When Hattie finagles an invitation to a house party being hosted by the parents of her good friend and Oliver realizes that the hostess is one of the girls he and his friends ridiculed all those years ago, he sees a chance to finally offer his long overdue apology. He had long ago decided to never marry so meeting a woman he could love while at the party was so far out of the realm of possibility that it never crossed his mind...until his first glimpse of Lizzie. But does he have what it takes to draw Lizzie out of her self-imposed exile and teach her to once again laugh, smile, and give love a chance?

What a sweet, witty, and heartwarming story! Oliver is a terrific hero. I so enjoyed his dedicated courtship of Lizzie. He's one of the good guys and, heaven knows, after what Lizzie endured at the hands of her late, unlamented husband, she certainly deserves a good guy. The secondary cast forms an engaging, caring, and humorous backdrop for our main couple that moves the story along. Also, it's clear while reading Hattie's scenes that Ms. James knows the roller-coaster daily drama of living with a teen-age girl and is able to find the heart and humor in it. As an added bonus, there's a lovely scene with Josie and Mayne, the much-loved heroine and hero from James' Pleasure for Pleasure, the final book in her Essex Sisters series and an indoor croquet match that is not to be missed.

This feel-good novella goes into my keeper collection. I've already read it twice and no doubt will revisit it again in the future. 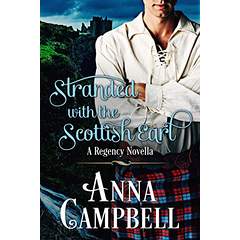 Proud, independent Charlotte Warren is happy managing her father's estates and has no intention of tying herself to a husband which is why she's put out by the letter she's received from her father telling her that he's found the perfect man for her. Still in her Cinderella costume after the village's Easter play rehearsal, she's alone in her home (the household staff is still in the village) when a tall, handsome man arrives at her door.

Ewan Macrae, Earl of Lyle never expected to fall in love with a portrait but that's exactly what happened when his new friend, Charlotte's father, showed him the miniature of his daughter. Wanting to get to know her on his own, Ewan impulsively leaves London and arrives unannounced, in the pouring rain, on her doorstep. Knowing exactly who he is, Charlotte introduces herself as the housemaid, Flora whereby Ewan, knowing full well Flora is really Charlotte, introduces himself as Mr. Ebenezer Smith. Charlotte doesn't want him there but before he can leave, the rain washes out the bridge, trapping the household staff in the village and Charlotte/Flora and Ewan/Ebenezer on the estate. And then the fun begins...

I've enjoyed all of Anna Campbell's novellas but this one just might be my favorite. I couldn't possibly resist a charming, sexy, Scotsman who falls in love with a portrait; an independent, stubborn, English spinster who has vowed never to marry; and the overflowing river that traps the two of them together. I adore "trapped by the elements" stories! Add to that, Campbell's witty banter, sexual tension, humor, and charm, and you have a story that tickled my funny bone and captured my heart. Oh, and as a bonus, there's an epilogue that is an absolute delight. I'll be reading this one again!

Once Upon a Moonlit Night
By Elizabeth Hoyt
Publisher: Forever Yours
Release Date: July 5, 2016 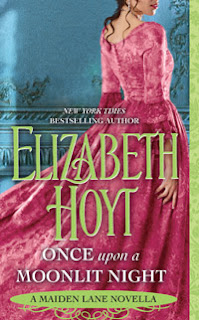 If you've read Hoyt's Duke of Sin, you may have wondered what happened to heiress Hippolyta Royal after she escaped the clutches of the Duke of Montgomery. I know, I did! Well, wonder no more. In this fast-paced, entertaining, and sizzling novella, Hoyt gives readers the rest of the story and it's a winner.

Matthew and Hippolyta are worthy, bantering adversaries from the moment she flags down his carriage. Dressed in ill-fitting clothes and wearing mud from head to toe, it's no wonder Matthew doubts her story of being an heiress...although she does seem to have a vast array of knowledge for the actress (or worse) that he thinks she is.

Matthew, who has been in India mapping and collecting scientific samples, has reluctantly returned home to accept a bankrupt title he never wanted. He's exhausted, grumpy and, at times, downright rude. He agrees to give Hippolyta a ride to the next town but that's it.

When an incident at their first stop convinces Matthew to take Hippolyta all the way to London, the fun really begins.  Rapid-fire banter, unwanted attraction, and sizzling sexual frustration all combine to make this road romance from Hoyt a real treat. I liked both Matthew and Hippolyta and enjoyed watching them traverse the pitfalls of their relationship as well as learn to take ownership of who they are...both individually and as a couple. The secondary cast - on the road and in London - all add to the fun, especially Matthew's pet, a clever little mongoose named Tommy Teapot. Like many of Hoyt's stories, the sex scenes - and accompanying language - are explicit although, in this story, they don't occur until almost the end of the novella. I have to say, I really enjoyed the build up of sexual tension throughout the first eight chapters.

For fans of Hoyt's Maiden Lane books, Once Upon a Moonlit Night will be a welcome addition to the series. Readers new to the series, however, need not fear. This engaging novella stands very well on its own.


Are you a fan of novellas? Have you read any of the above?

Tell me about recent novellas you've read and enjoyed.

One randomly chosen person who leaves a comment will receive a Kindle copy of all three novellas.