Review - - Then He Kissed Me 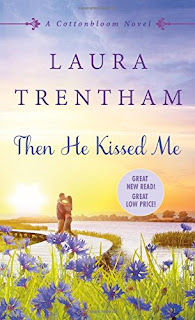 Best friends and confidants, young Nash Hawthorne and Tally Fournette were inseparable but, at the age of ten, dual tragedies ripped them apart. Skinny, nerdy Nash was sent to live with his snobby, well-to-do aunt on the Mississippi side of Cottonbloom where he thrived academically, if not socially, going on to excel in college and beyond. Tally remained on the blue-collar Louisiana side of the river that separates Cottonbloom, struggling to survive the dire circumstances in which she and her older brothers found themselves after the deaths of their parents and rebelling when faced with the shame and frustration of being unable to keep up at school because of undetected dyslexia. To say she had a chip on her shoulder would be a major understatement.

Nash returns to Cottonbloom to teach history at the local college. No longer the skinny kid who fished the river with Tally, he's educated, world-traveled, and quite the sexy hunk. He's also determined to rekindle a friendship - and maybe more - with the childhood best friend he never forgot. But there are obstacles - both his own and the ones Tally throws in his path - that must first be overcome.

Though Tally owns a successful gym, she still views herself as inferior, especially to Nash. She's ashamed that she never attended college and while she's a whiz with numbers, she still has difficulty reading due to her dyslexia. She can't imagine why a man who reveres books would want anything to do with a woman who can't read one. Adding to her battered self-esteem is her abusive ex-boyfriend who refuses to leave her alone, consistently reinforcing the belief that she was weak and stupid to ever have let him into her life.  Her feelings for Nash quickly grow but in order to trust in the love and happiness he offers, she will first have to learn to love and accept herself.

Laura Trentham is quickly becoming one of my favorite contemporary romance authors. I've fallen in love with the citizens of Cottonbloom and their divided town, especially Tally and Nash. These two really spoke to me. I ached for Tally and all she had endured and while I usually go for alpha heroes, Nash's beta-hero character stole my heart. Trentham's characters are well formed and complex, and she brings them to vibrant and realistic life on the pages of her books. They could easily be people you'd meet at the Saturday morning farmer's market or a Friday night street dance. She surrounds them with a supporting cast of interesting characters, some of whom have stories of their own that are inter-woven with the hero's and heroine's, adding layers of richness to the book without drawing the focus away from the main couple. And then there's the town of Cottonbloom, a character in itself that Trentham brings to vivid life through her words. Reading the Cottombloom books, I can smell the magnolias in bloom and feel the sultry heat of deep south summers on my skin. It's all part of the total reading experience that she does so well.

Then He Kissed Me is going straight to my Best of 2016 watch list and also to my keeper shelf, along with the first book in the Cottonbloom series, Kiss Me That Way. I have no doubt that they will soon be joined by the third book, Til I Kissed You, due to be released August 2.  I highly recommend Laura Trentham's Cottonbloom books for your summer reading pleasure. As each book builds upon the previous one in the trilogy, I would encourage readers to read them in order.