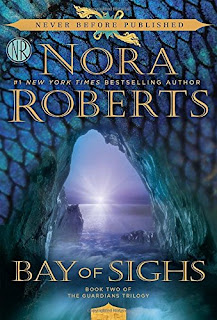 The second in the THE GUARDIANS series features Annika, a mermaid, and Sawyer King, a descendant of sea-faring time-traveler. They, along with four others, have banded together to conquer evil and return three stars to where they belong and forever out of reach of the darkness.

Annika is a pure soul who is new to the world above the water; she delights in nearly all she encounters and loathes to harm anyone, but she will do her part to defend the stars from falling into the wrong hands. While she does, she wouldn’t mind being in Sawyer’s hands, at least for as long as she’s allowed above the sea. Sawyer is enchanted by Annika and her joyful ways, but knows getting close to the mermaid will only lead to heartache in the long run. After all, theirs would definitely be a relationship that would be doomed to end sooner rather than later.

This series features a number of new paranormal elements not usually encountered in a Nora Roberts’ novel (at least not all at the same time): a witch, a seer/prophet, a mermaid, a time-traveler, a werewolf, and an immortal. While this might appear to be a disparate group of elements, and while the story seems to draw from about three or more different fairy tales before spinning off into something new, it works; and it’s all held together with classic Nora Roberts’ banter, suspense and unique characters. I wasn’t sure I would enjoy this trilogy like I had many of her previous ones that dealt almost exclusively with only one main element of paranormal at a time, or at least an alternate lifestyle (i.e. Wicca); however, I couldn’t put it down and I enjoyed it immensely. I look forward to reading the third in this series and learning how the guardians finally defeat the darkness forever.