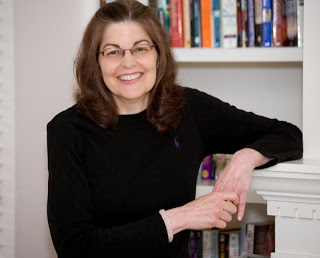 It's always a pleasure to host Vanessa Kelly but today is special because we're celebrating the release of her new historical romance, My Fair Princess. I've been enjoying Vanessa's books since her debut but this new one is one of my all-time favorites from this talented author and her heroine, Gillian has leaped onto my all-time favorite heroines (by all authors) list. I absolutely adore her. In Charles, she finds her perfect match...eventually. I loved having the opportunity to travel their journey with them.  It's fun, emotional, and oh, so enjoyable!

Kelly is an award-winning author who was named by Booklist, the review journal of the American Library Association, as one of the “New Stars of Historical Romance.”  Her Regency-set historical romances have been nominated for awards in a number of contests, and her second book, Sex and The Single Earl, won the prestigious Maggie Medallion for Best Historical Romance. The Renegade Royals, her last series, was a national bestseller. Vanessa also writes contemporary romance with her husband as VK Sykes.

Where you can find Vanessa online:


With a song in my heart!

Like most writers, I’m a bit obsessed with the high concept. After all, there are only so many basic story ideas—boy meets girl, boy loses girl, and so on—so it’s the particular twist or crazy viewpoint that often gives a book or movie some oomph. The classic example of the high concept movie, for instance, is Aliens—Jaws in space.

With MY FAIR PRINCESS, I’m starting a new series. It’s actually a spin-off from my previous one, The Renegade Royals. The heroes were the unifying concept for that series—they’re the illegitimate sons of England’s royal dukes. The concept is actually based on the fact that the Prince Regent and his randy brothers all but littered the English countryside with illegitimate children. It’s a bonus in historical romance when you can take a concept and ground it in true-life events!

My new series, The Improper Princesses, also features the illegitimate children of those rakish royals—but this time it’s the ladies rather than the gents who are front and center. My heroines are all royal by-blows, half-sisters or cousins of the Renegade Royals, and they face adventures just as challenging, dangerous, romantic, and entertaining as their male counterparts.

But there’s another concept that unifies these stories—each Princess book is based on a famous movie musical. You might ask where that idea came from, and I’d have to confess that I don’t have a clue. Except for the fact that I love classic movie musicals!

When I was a kid, I never missed a chance to watch those fabulous movies whenever they came on TV. Seven Brides for Seven Brothers, My Fair Lady, Camelot…I loved all of them. Some I even saw in the movie theatre, in all their glorious Technicolor.

MY FAIR PRINCESS obviously riffs off My Fair Lady. Gillian Dryden is an unconventional heroine, one who was raised in rural Sicily and taught from an early age to take care of herself. She’s a crack shot, a bruising rider, and she carries knives in her boots—just in case! Gillian is also something of a Robin Hood figure. She’s the sworn enemy of bandits and brigands, and will do whatever she must to protect the innocent and seek justice.

Which lands her in a great deal of trouble, as you can imagine. That trouble eventually brings her to the attention of Charles Penley, Duke of Leverton, the most polished and sophisticated man in the ton. It’s up to Charles to teach Gillian proper manners in the hopes that she a) leaves off hunting bandits, and b) finds a proper husband.

Let’s just say that things don’t work out as planned. I’ll also note that Charles, whose nickname is Perfect Penley, ends up changing more than Gillian does. That’s the genius of the high concept—you can twist and shape it however you want. Taking an old or well-worn idea and making it new…for a writer, nothing could be more fun!

Are you a fan of movie and stage musicals? Do you have favorites, or do you loathe the entire genre? One person who comments will win two books from my backlist—reader’s choice! 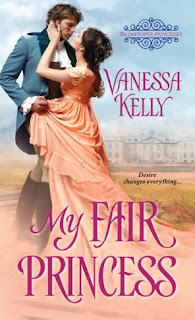 First, Vanessa Kelly brought readers The Renegade Royals. Now, in a delightfully witty new series, she introduces The Improper Princesses—three young women descended from royalty, each bound for her own thrilling adventure . . .

Despite being the illegitimate daughter of a prince, Gillian Dryden is happily ignorant of all social graces. After growing up wild in Italy, Gillian has been ordered home to England to find a suitable husband. And Charles Valentine Penley, the excessively proper, distractingly handsome Duke of Leverton, has agreed to help transform her from a willful tomboy to a blushing debutante.

Powerful and sophisticated, Charles can make or break reputations with a well-placed word. But his new protégée, with her habit of hunting bandits and punching earls, is a walking scandal. The ton is aghast . . . but Charles is thoroughly intrigued. Tasked with taking the hoyden in hand, he longs to take her in his arms instead. Can such an outrageous attraction possibly lead to a fairytale ending?