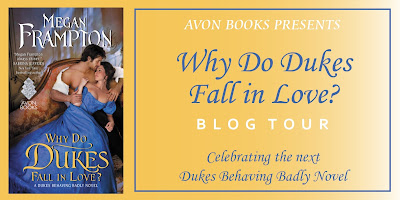 Why Do Dukes Fall in Love? 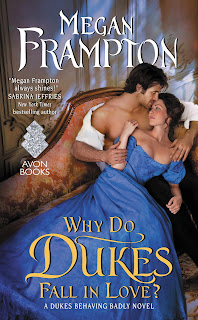 Michael, the Duke of Hadlow, is in need of a secretary—one, he hopes (but isn’t particularly optimistic) this time will not be a complete moron. After interviewing a number of candidates—each dumber than the one before—he meets the perfect secretary: Mrs. Edwina Chetlam. Hadlow isn’t one to allow emotions (“I can’t hire a woman”) to get in the way of logic. Logically, Mrs. Chetlam is everything he desires in a secretary: competent, efficient, courageous, and seemingly able to read his mind. It’s amazing to meet someone who actually doesn’t cower whenever he expresses his frustration but takes him in stride and when necessary, stands up to him. Most importantly, she’s the only one capable to actually do the job.

It’s only natural when their mutual attraction for each other grows and they embark on a passionate affair that only blazes higher instead of fade out (as he expects), and when he decides he needs to take a bride, he soon discovers that instead of marrying a proper woman within his own class, as his secretary advises, he only wants Chetlam. But as a man who has difficulty expressing any emotion other than anger, Hadlow learns the hard way that what he feels for Chetlam is more than just friendship or an ability to rub along together. No, what he feels is no less than true love, but is it too late to get Chetlam to change her mind about marrying him?

Ah, but if there’s anything dukes are especially good at (besides their way around the bedroom), it’s getting what they want.

Normally I’m not a fan of the Boss and the Servant Trope, but I think Ms. Frampton did an excellent job of making the hero and heroine seem very equal. It was always clear Hadlow respected Chetlam (in fact that’s what he always called her, which I adored) and valued her intelligence; and the fact he’s so bad with people in general and she’s his buffer to the rest of the world puts them as partners rather than master and supplicant.

Their banter is hilarious and their conversations always add to the story, growing them both as characters. It was a joy watching Hadlow grow into a more empathetic person; and Chetlam grows in her daring and boldness, which leads to even funnier and more poignant scenes. The running joke about a piece of railroad engine compared to the duke never gets old. A very charming romance.


Megan Frampton writes historical romance under her own name and romantic women’s fiction as Megan Caldwell. She likes the color black, gin, dark-haired British men, and huge earrings, not in that order. She lives in Brooklyn, New York, with her husband and son. You can visit her website at www.meganframpton.com. She tweets as @meganf, and is at facebook.com/meganframptonbooks.