Review - - No Mistress of Mine

No Mistress of Mine
By Laura Lee Guhrke
Publisher: Avon
Release Date: August 30, 2016 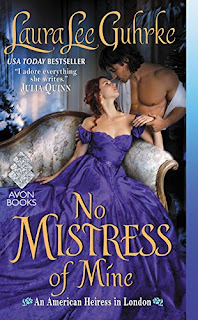 Denys, Lord Somerton, only son of Earl Conyers, was a wild young man. His wildness culminated in the summer of his twenty-fourth year when during a visit to his friends Nicolas, the Marquess of Trubridge (When the Marquess Met His Match) and Jack, the Earl of Featherstone (Catch a Falling Heiress), Denys met Lola Valentine, a beautiful, red-haired, American cabaret dancer who had taken Paris by storm. Denys was besotted at first sight and determined to win the independent beauty. His patience, his charm, and above all his tenderness, a quality in short supply in Lola’s life, prove irresistible, and he and Lola become lovers. In an attempt to draw Lola to England, Denys secretly backs a production of Ibsen’s Quicksands, mortgaging his estate to do so, in order to give her a chance to realize her dream of becoming a respected actress. With no training, Lola overacts. The critics annihilate her, calling her performance “awkward, graceless, and infinitely pathetic,” and the play closes immediately. Faced with the reality of her life as a kept woman and with the knowledge that his relationship with her is alienating Denys from his family, Lola accepts an offer from Henry Latham, American impresario and Earl Conyers partner in the Imperial, a London theater. She allows Denys to believe she has betrayed him.

Six years later, Denys has changed significantly. He has become sober and respectable, an ideal son. He proves so proficient in business that his father has turned the management of all the family’s affairs over to him. Among these is the Imperial, which Denys has transformed from a disreputable music hall into one of London’s premier theaters, celebrated for its productions of Shakespeare. Denys is even considering a marriage to a proper young lady of whom his family wholeheartedly approves.  Then his father receives a letter from New York with news that reawakens Denys’s memories of that time with Lola.

It still made Denys grimace when he thought of the money he’d spent, the fights he’d engaged in, the friends he’d almost lost, and the fool he’d made of himself over a bit of skirt who in the end had proved as faithless as the wind. Looking back, he knew there was only one explanation. He had been mad.
He was now sane.

The six years have brought changes to Lola as well. Gossip on both sides of the Atlantic may have proclaimed her Latham’s mistress, but in reality the impresario has been her friend, mentor, and father figure. With his help, Lola Valentine has become an acclaimed star in musical revue. Latham has also fulfilled his promise to see that she receives training as an actress. At Latham’s death, he leaves Lola his half interest in the Imperial, enough money to claim an active partnership, and a posthumous challenge to pursue her dreams.

Lola’s return to England threatens Denys’s peaceful, productive life. The last thing he wants is a partnership with the woman who nearly destroyed him. But when she refuses to sell her interest and legal means of denying her an active role in the theater prove futile, the two reach a degree of accord and begin to work together. However, the powerful chemistry between them undercuts their plan for a strictly professional relationship. All the reasons they were a mismatch earlier still exist. Can they overcome the barriers of class and a painful past to claim a second chance at love?

No Mistress of Mine is the fourth installment in Guhrke's An American Heiress in London series, and I think it is the strongest book in the series. Both the lead characters are interesting and complicated, and their back stories add depth with no touch of info dump. The sensuality level is high, and Guhrke earns accolades for making the love scenes essential to character development rather than mere titillation. Fans of historical romance will enjoy the deftness with which the author weaves together popular tropes including second chance, cross-class romance, and the American heroine. I particularly like the twist she gave the last trope. Lola is an American heiress but not in the generally accepted sense. I usually find characters who sacrifice the relationship to “save” the beloved irritating, but it works in Lola’s case because her motivation is plausible and persuasive.

She’d hurt him, she knew that. She’d taken any affection he felt for her and shredded it. But there’d been no other way to make him see that a girl like her, a girl born beside the cattle yards and slaughterhouses of Kansas City, who’d spent her childhood amid the smells of manure, blood and rotgut whiskey, who’d started stripping down to her naughties in front of men before she was sixteen, could never make a man like him happy.

I also applaud the conclusion that provides the requisite HEA without ignoring the real problems of a cross-class relationship.

Although characters from books earlier in the series appear, this book can easily be read as a standalone. If you like historical romance with ample heat and a strong appeal to head and heart, I think you will enjoy this one as much as I did.