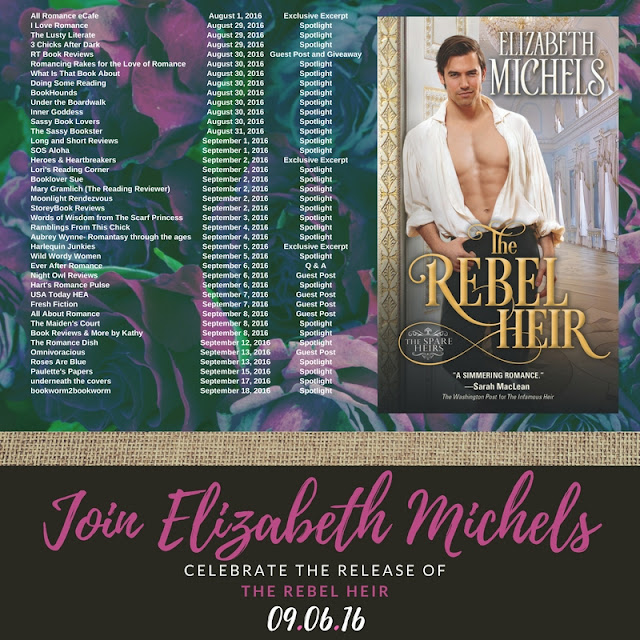 Elizabeth Michels​ is the award-winning author of the Tricks of the Ton series and the Spare Heirs series and one of my favorite new historical romance authors. I finished her new book, The Rebel Heir late last night and it's wonderful. I've enjoyed everything she's written but this one is, in my opinion, her best work to date. I adored both Ash and Evie and the sometimes humorous, sometimes heart-wrenching, and, ultimately, satisfying journey Michels gave them. There's a scene near the end that is one of my all-time favorite scenes in any novel I've ever read. I don't want to give away spoilers so I'll just say that daisies have always been my favorite flower. I hope you'll all read the The Rebel Heir and enjoy that scene - and the rest of the book - as much as I did. Now, here's Elizabeth Michels!

Hi, everyone! Let’s play a game! Since deception is a key ingredient in THE REBEL HEIR, the second book in the Spare Heirs series, I thought it would be fun to play two truths and a lie.  Do you know how this game works?

Ash Claughbane is here to tell you three things about himself and one of them is a lie…Yes, just one.  *gives Ash the side eye to keep him honest for a few minutes* Can you guess which fact isn’t true about Ash?  Good Luck!

I made my way through all of Wales where my brothers were less likely to find me, then I began moving through southern England.  That was when he found me, not my eldest brother, the new duke, thankfully, but Fallon St. James.  He invited me to join a secret club of title-less gentlemen in London called The Spare Heir Society.

I’m not one to join anything at all.  I have no need of any sort of brotherhood having abandoned my own brothers long ago.  I told St. James as much and yet he gave me his calling card.  Stranger still, I kept it.  Now I’m in London, with a room in St. James’ peculiar home and headquarters.  My clothing remains in my trunk, but I’m here, newest member of The Spare Heirs Society.

His heart beat beneath Evangeline’s hand.
“Ash, this is dangerous— whatever is happening here…”
“I know.” He grinned the wicked grin of a swindler about to steal the prize. “Say that you enjoy it as much as I do, Evie. Admit that you like breaking your rules with me.”
“They aren’t my rules,” she said.
“Then why follow them?”
She swallowed and looked up at him. “I make poor decisions on my own.”
“I disagree,” he said, still holding her close. He toyed with the hair that fell over her shoulder.
“I haven’t thrown you from my bedchamber. I’m certain that’s a poor decision.”
“That’s a matter of opinion,” he said with a grin. “What’s your opinion? What do you want, Evie?”
You, her heart screamed, but her mouth refused to form the word. Her gaze dropped back from the depths of his eyes to his lips. He was so close, and yet he only touched her hair and held her hand to his chest. It would be so easy to rise to her toes and show him what she wanted. And yet it wasn’t easy at all.
“You think I haven’t noticed that you’ve been staring at my mouth since I arrived?”
“I have not…” She began to disagree, but it would have been a lie and he knew it.
“Say that you want me to kiss you, Evie.”
“I would never…” she began, but fell silent.
“Tell me you want me. Say the words and I’ll kiss you.”
Evangeline’s lips parted, but she said nothing.
“Say, ‘I want your lips on mine, Ash.’ That’s all you have to do. I could show you so many things, Evie. Do you want me to? Say the words.”
Her breathing came out harsh as her heart pounded in her chest. How was he making her so unsettled simply with words?
“I could bring you so much pleasure, Evie. Do you want me to touch you? To truly touch you? If you asked me, I would fit your breasts into the palms of my hands just like this.” His hand hung in the air over her breast, close enough that she could feel the heat of his skin through her night rail. “Then I would lower my mouth to take your nipple between my teeth, tugging at your polished exterior until the real Evie pulled me closer. I would take your breast into my mouth and with my tongue…” He sighed, dropping his hand away from her. “But you have to tell me you want it.”
“Ash,” she whispered, already missing the heat of him close to her skin.
“There’s a world out there that you could experience. All you have to do is stop hiding and tell me what you want.”
It wasn’t that simple, was it? She opened her mouth, unsure how to speak of her own desires. She never talked that way, not like Ash was able to do. But the truth was, she did want him to kiss her. She wanted everything about this man. That was also the trouble. She couldn’t be trusted to speak— not just now. “I…”
He grinned and brushed a strand of hair from her face, placing a kiss on the top of her head as he did. “You’re almost there. Just a few more words. Perhaps you need more encouragement.”
“No.” She took two steps backward until her heels bumped the wall. “I- I’m quite…”
“Evie, has anyone ever spoken to you this way?” He took slow steps to close the gap between them.
“No,” she breathed.
“Do you like it when I do?” He grinned down at her as if he could hear all the thoughts she was too afraid to voice aloud. “I think you do. Do you want me to continue?”
“Do I have to say that as well?” she asked.
“No. I’ve learned in my line of work that it’s sometimes necessary to give someone a taste of what they want before they’ll pay the price.”
“Is that what you’re doing to me? Is this a taste of what’s to come?” Heaven help her, she hoped it was.
“Only if you want it. That’s my price.” He shifted her hair from her shoulder as he spoke, letting it fall down her back.
“That seems…” Whispers of his touch brushed down the side of her neck as he moved her hair. She worked not to lean into his palm and feel the full force of his hand on her skin. “…reasonable.”
“I thought so as well.” He shifted even closer to her, leaning his arm on the wall above her head and surrounding her without the benefit of his embrace to steady her. “If you tell me you want me to kiss you, I’ll kiss you here.” He spoke the words against the sensitive skin beneath her ear before moving down her neck, not touching her, but close enough that she could feel the warmth of his lips.
She splayed her hands on the wall behind her to keep from tipping sideways. He wasn’t even touching her, and still she struggled to breathe.
“I would kiss my way down your neck to just here where I can see your pulse beating rather fast. Is it beating fast because you want me to kiss you, Evie?” he asked against her skin. “You know my terms. Say the words. This is only the beginning…” 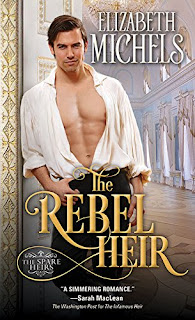 The Spare Heirs Society Cordially Invites You to Meet Ash Claughbane: The Imposter

Lady Evangeline Green is living a lie. To please her family, she masquerades as the perfect debutante…until she meets the wickedly charming Lord Crosby. With him, there are no rules. She’s finally free to do as she desires—but freedom comes with a price, and Lord Crosby is not what he seems…

Ash is not Lord Crosby. He’s a con artist, a noble Spare Heir living off his silver tongue. When the Greens ruined his family, he swore he’d make them pay, and he never doubted his devotion to revenge…until he met Evangeline. Now, caught in a web of lies, torn between duty and desire, what’s a con to do but deceive all of London and steal the one lady who dared match wits with the devil himself?