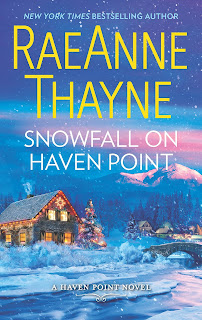 Andrea Montgomery’s life is just beginning to approach normalcy after a period of grief over the death of her husband, a police officer killed in the line of duty, and after the fear and abuse she suffered at the hand of a rapist/stalker. She is looking forward to making their first Christmas in Haven Point, Idaho, a special one for her two children. When her friend Wyn Bailey (Riverbend Road) asks her to check on Sheriff Marshall Bailey (Wyn’s brother) who has just been released from the hospital, Andie cannot refuse. She will do almost anything for Wyn who literally took a bullet for Andie. Dealing with the grumpy, intimidating sheriff while all the Baileys are out of town is nothing in comparison.

Marshall Bailey is no more enthusiastic about accepting Andie’s help than she is about giving it. The broken leg that is the worst of the injuries he received when he was struck by a hit-and-run driver is the least of his problems. He is convinced that he was intentionally lured to an abandoned site and struck by the vehicle that then raced away. He also has an embezzlement case in his department, and he is facing a major complication in his personal life: a troubled teen who doesn’t yet know that Marshall is his father.

When Andie first shows up at Marshall’s home with food and with kids in tow, Marshall is his worst curmudgeonly self. A man who values his independence and who is accustomed to being in charge, Marshall resents the intrusion and his attitude is clear. But he gradually begins to fall under the spell of the winsome widow and her children. The pace of his acceptance accelerates when a blizzard forces the foursome together for an extended time. The kids are charming their way into his heart, and their mother is raising his temperature and provoking thoughts about commitment that Marshall never expected to experience. However, Andie has reservations and fears of her own. Can she risk her heart for another man whose job means he is in danger?

This is the fifth book in Thayne’s Haven Point series, and it contains the charm and heartwarming appeal that are characteristic of her work. Fans of the series will already be invested in Andie and her children, and new readers will quickly follow suit. It is also easy to fall for the crusty Marshall with his scars, physical and psychological, and his outsize heart. The fact that this is a Christmas book is a plus. Thayne and Christmas romance go together like mistletoe and kisses, and Snowfall on Haven Point has enough Christmas packaged in it to please any reader with a love of holiday romances.

If the Haven Point series so far has not inspired the immense affection I have for Thayne’s Hope’s Crossing books, it nevertheless has proved to be a consistently solid series with a high entertainment quotient. If you like your contemporary romance tender and accompanied by a strong emphasis on family and community, I think you will enjoy this book. It offers further evidence that Thayne continues to be among the very best writing in the small-town romance subgenre.