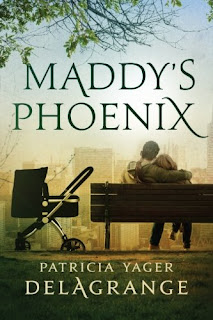 Maddy has not had an easy life. Abused by her mother as a child, abandoned by her as a young teen, then abandoned by the boy who impregnated her, Maddy found herself scorned by her fellow students, even after she miscarried the baby. Still, she dedicated herself to her studies and excelled in school while waitressing at the local cafe only to fall for another wrong guy who disappeared as soon as she told him she was pregnant. But Maddy is determined to make a good life for the baby she carries. She's saving her tips, determined to leave her small hometown and go to college to become a nurse. Then tragedy strikes. But, on the heels of tragedy, comes what seems to be a miraculous event. She finds an abandoned baby and Maddy does something wrong...for all the right reasons.

With Cheryl, an older co-worker who has been like a mother to her, the three leave for the big city. Maddy earns a scholarship to study nursing, the baby thrives, and Maddy finally meets a man who treats her with kindness and respect. All of her dreams are coming true...until they aren't...and Maddy must face the actions of her past if there is to be any hope of happiness in her future.

Maddy's Phoenix is a poignant tale that engaged my interest and my emotions. Though there is a romantic element - and happy ending - in this book, there is no doubt that it is Maddy's story. Delagrange takes her from her lowest point and patiently guides her through the evolution that follows, exploring a multitude of relationships. There's Maddy's relationship with baby Judith, her budding romance with Bryce, her familial relationship with Cheryl, Cheryl's own relationship with her estranged daughter, Maddy's fractured relationship with the mother who abused and abandoned her, and, finally, Maddy's relationship with herself. The treatment she was subjected to in her childhood and teens has had a deep impact on her psyche, robbing her of her self-esteem and leaving her feeling unworthy. At times, she seems impossibly young but, by the end of the book, her growth and internal strength is evident.

I enjoyed Maddy's Phoenix and was in Maddy's corner the entire way. I also liked Bryce and the role he played in Maddy's evolution. I adored Cheryl, the woman who devoted herself to Maddy and Judith, even as she battled her own demons and guilt over her daughter's estrangement. I did, however, have a couple issues with the book that brought my rating down. The beginning of the relationship between Bryce and Maddy hit a hot button for me and though I found their HEA believable and satisfying, and turned the final page confident of their happy future, I still couldn't quite forget how their relationship began. Also, the resolution of Maddy's relationship with her mother seemed a bit too easy considering their history. Those issues notwithstanding, the characterizations are strong, the author's storytelling is engaging, and the ending, satisfying. I'll be reading this author again.


Patricia Yager Delagrange grew up in the San Francisco Bay area, the daughter of a homemaker and fireman. The author of four women’s fiction novels, including the just-released MADDY’S PHOENIX, Patricia was among the first 400 women to attend what had been an all-male college. The mother of two (almost) grown children, she now writes full-time, except when she’s playing with her pups or riding her Friesian horse, Maximus.

Patricia, did you always want to be an author?

Patricia:  I’m a latecomer to the author ranks. I had planned on becoming a psychiatrist. However, during a college internship at Napa Mental Hospital my sophomore year, I was cured of that interest while working with abused teens. I’ll never forget learning how one of my favorite patients had been put into a frying pan when she was a baby. I am an empath, and I became physically ill working with these poor young people. I couldn’t separate myself from their pain, couldn’t compartmentalize it enough to help them. Sometimes you’re just not made for things you think you want to do!

This business of being an empath explains your ability to connect with your characters who have undergone the worst kinds of tragedies one could experience—the death of a baby at birth the death of a spouse and an adoption gone wrong. And in MADDY’S PHOENIX, a young woman who has had two miscarriages late term, then discovers an abandoned baby left to die in a dumpster.

Patricia:  Yes, I’m always thinking, “How would I feel if that happened to me?”

So you switched from psychiatry to—?

Patricia:  Spanish. I spent my junior year in Madrid, living in a Spanish dorm and taught by Spanish-speaking professors. I spent my senior year at U.C. Santa Barbara, where I graduated with a B.A. in Spanish. Ultimately, I earned my Master’s Degree in College Student Services Administration from Oregon State University and got a job as a Financial Aid Counselor at U.C. San Francisco.

Which is why you able to write the character of college professor Bryce in MADDY’S PHOENIX so convincingly.

Patricia: Well, I hope I did. I worked in academia. And MADDY’S PHOENIX is women’s fiction, but she does find romance in her life. After all, romance is a part of everyone’s life at one time or another!

Were you always an avid reader?

Patricia:  My mom read to me when I was a child and enrolled me in the Book of the Month Club. I recall the first book I received—a story about the ocean and fish, with a blue-green picture on the front. I thought it was the coolest thing ever that I owned a book and would own a new book every single month. That’s when I started reading books. I never stopped. I don’t ever NOT have a book by my side. I go to bed every night reading a book, or I can’t sleep.

In MADDY’S PHOENIX, Cheryl is an older woman who waitresses with Maddy at the little truck stop in Monte Rio, California. She’s much like a mentor to Maddy. Have you had an older woman, like Cheryl, who has mentored you?

Patricia:  My mother. I was very, very close to her. I adored her. She taught me what it is to be loved even when you’re not perfect. We’d talk on the phone all the time. Then I became her caretaker when she was going through chemo and radiation for ovarian cancer, a battle she fought for ten years. Even when she got Alzheimer’s, she never forgot who I was. She’d listen to all my stories, time after time, with as much enthusiasm as she had the first time.

What’s something readers would be surprised to learn about you?

Patricia:  I am an elephant maniac. I even have a new tattoo on my right forearm of a mommy elephant with her baby that my daughter and I recently got at the same time.

How did you meet your husband?

Patricia: I’m the third of six sisters. My sister who is 10 years younger than I am had a girlfriend who was getting married, and my sister invited me to the wedding—to set me up with a guy she knew would be there. Well, when I got there, I was drawn to the brother of the guy she wanted me to meet instead. After a couple of hours, I said to myself, “He’s the man I’m going to marry.” We’ve been together ever since.

Patricia: Sliding down the pole at the firehouse with my father.

Patricia:  A duckling. But when it grew into a full-fledged duck, we had to take it to a lake and set it free. Sad moment!

What book are you working on now?

Patricia: I just finished the draft of a story about four sisters and a family fractured by divorce until their mom dies after a long battle with cancer. I’m calling it MENDING FENCES.

Patricia: My Facebook page is a good place—and I’d love for readers to sign up to receive my monthly newsletter so I can share fun stuff with them—like the latest news about my pups and my honey of a horse! They can do that on www.PatriciaYagerDelagrange.com.