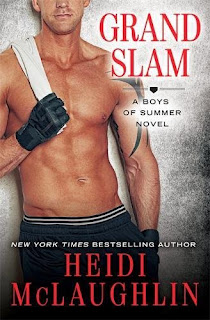 The boys of summer are here in Heidi McLaughlin’s Grand Slam. This is the third book in the series but one that can easily be read on its own. I give this book five out of five stars. There’s a lot of punch in this book. Both the hero and heroine are faced with some pretty immense issues.

Travis Kidd plays for a major league baseball team: the Boston Renegades. He is a shining star on the team and if there’s trouble to be had - he has it. A self-admitted ladies man, Travis enjoys the fairer sex as much as they do him.

That can’t include a publicist on his team, Saylor Blackwell, but it did and with disastrous results. She left so fast he wondered if what happened between them ever did.

Sleeping with him caused a ripple effect in her personal life and could end her career. However, with Travis as a media darling in the off-season, they have no choice but to try and work together. Travis is wrongly accused of rape and Saylor and her team are called in. Travis comes forward to clear his name but the media and a district attorney up for re-election work to prove him guilty and fast. Saylor is the only one who can confirm that he did not do anything at all. To do so could jeopardize her career and personal life. Add to this a disgruntled ex, who after walking out on her and their child, wants back in.

It takes a strong person to withstand these storms. Travis finds that his attraction to Saylor is more than a physical one. Their attraction grows and they find that as a team they can face and conquer anything.

They have quite a road ahead of them to a happily ever after. I really liked the way the story unfolded. I look forward to reading more of Heidi McLaughlin’s books and plan to read some of her other works, as well.