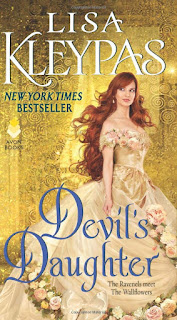 Although beautiful young widow Phoebe, Lady Clare, has never met West Ravenel, she knows one thing for certain: he’s a mean, rotten bully. Back in boarding school, he made her late husband’s life a misery, and she’ll never forgive him for it. But when Phoebe attends a family wedding, she encounters a dashing and impossibly charming stranger who sends a fire-and-ice jolt of attraction through her. And then he introduces himself...as none other than West Ravenel.
West is a man with a tarnished past. No apologies, no excuses. However, from the moment he meets Phoebe, West is consumed by irresistible desire...not to mention the bitter awareness that a woman like her is far out of his reach. What West doesn’t bargain on is that Phoebe is no straitlaced aristocratic lady. She’s the daughter of a strong-willed wallflower who long ago eloped with Sebastian, Lord St. Vincent—the most devilishly wicked rake in England.
Before long, Phoebe sets out to seduce the man who has awakened her fiery nature and shown her unimaginable pleasure. Will their overwhelming passion be enough to overcome the obstacles of the past?
Only the devil’s daughter knows…

Halfway through the first book in this series, I was already begging for West to have his own story. By the time his book went up for pre-order and I discovered his heroine would be Phoebe, Evie and Sebastian's widowed daughter, I was over the moon with anticipation. I am happy to report that Devil's Daughter met all of my expectations...and then some.

I've always had a soft spot for reformed rakes and Kleypas creates some of the best with Derek Craven, Sebastian (St. Vincent), and West Ravenel all near the top of my list. I wanted to hug young West and tell him everything would be okay and hug grown-up West and tell him how proud I was of how he'd turned his life around. I fell hard for his humor, his heart, his respect for those working his brother's estate, and his willingness to roll up his sleeves and work alongside them. I loved his playful side, evidenced in his relationship with Phoebe's two young sons, his sexy side, when his desire for Phoebe was given full reign, and his heartfelt apology for the actions of his youth. His vulnerability made me ache for him and want to jump into the pages of the book so I could fix everything. Luckily, for West, he had another reformed rake in his corner to help put things on the right path and wasn't that delicious. I do love it when one of my favorite heroes meddles in the life of another!

Phoebe is a wonderful blend of her parents and just what West needs in his life, as West is exactly what she needs in hers. I loved her hands-on relationship with her young sons and the lively interactions with her siblings. I enjoyed her humor and her stubborn determination and I appreciated her ability to forgive. It was fun watching her evolve from a grieving widow with uninspired sexual experience and little knowledge of her son's inheritance into a self-assured woman eager to explore her own sensuality and ready to take charge of her world. She's a great character on her own but I adored her with West. They have "meant to be" written all over them.

Of course, a bonus of Phoebe being the heroine of this novel is that Kleypas gifts readers with plenty of delicious page time with Evie and Sebastian. Especially, Sebastian. No complaints here. I'll happily take all I can get!


Are you reading this series?

Do you enjoy revisiting characters from a previous series in new books?

Who is your favorite Lisa Kleypas hero?