Hi Everyone! PJ, here. Are you ready for an adventure? Our favorite romance author / world traveler is on the go again and taking all of us along. Anna Campbell will be joining us at the end of February, March, April, and May to share her journey through France, Italy, Ireland, Scotland and England. I hope you're as excited as I am. Welcome back, Anna! 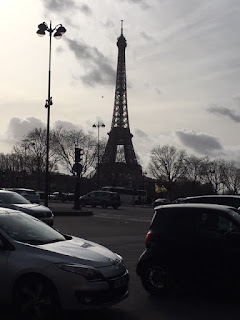 Lovely to be back here talking travel again. I had such a good time last year when I talked about my travels around Europe. I’m away for four months in total—a lot of that is writing time, but writing time still leaves space for sightseeing. This trip, I’m doing Paris, Venice, Ireland, Scotland and England. No exotic Balkan destinations like Slovenia or Croatia this time around! But I’ll still have lots of photos to show you and lots of places to tell you about.

As I write this, it’s midday and I’m sitting in my apartment in a very cold and foggy Venice. It’s 3 degrees C outside (37F). I haven’t yet ventured out, although I will later. The plan while I’m here is to edit The Highlander’s Lost Lady (The Lairds Most Likely Book 3) which is out at the end of April. It’s a nice excuse to stay home in the warm!

I left Australia two weeks ago to fly into Paris, where I had a lovely week mainly pottering around the Louvre Museum and getting over my jetlag – oh, and eating lots of croissants! I’ve learned with big art galleries like the Louvre, the best way to do them is to arrive with no expectations of covering a lot of ground, take my time, and concentrate on small bites.

As you can probably tell from the pictures here, I mainly hung around 15th, 16th and 17th century Northern European paintings. There are worse places to go to get over a flight from Australia!
I also went to the ballet twice. The weather outside was frightful and Palais Garnier, the elaborate 19th century opera house near where I was staying, was delightful! Get a load of that Chagall ceiling! The dance works were all cutting edge modern, which I enjoyed, although there’s something about that setting that cries out for tutus and blokes in tights.

After a week in Paris, I moved on to 19 days in Venice. I’ve been to Venice twice before, in 1985 and in 1995, so it’s nearly 25 years since my last drinks on the Rialto. Too long when I love it so much. I don’t drive, so there’s something particularly friendly to me about a place where nobody else does either, unless it’s a motorboat or a gondola.

Something I’d forgotten about Venice is how beautiful and clear the light is. I hadn’t forgotten how ridiculously photogenic it is. So far, the main change I’ve noticed is how many people are around. It’s Carnevale here, and I got caught up in huge crowds on Sunday when I went out. People were dressed up in all sorts of costumes, mainly 18th century, but there were quite a few aliens in the mix. Lots of beautiful masks, too. 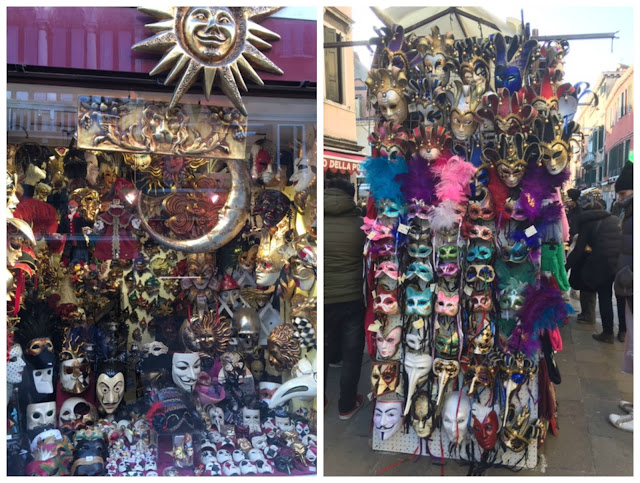 I’m a week into my stay and so far, I’ve done a lot of editing and a lot of walking around, particularly in the quieter parts of town. I’m finding it’s difficult to take a bad photo here – there’s something about water and old buildings and that high clear, blue sky that makes for a great composition.

I’ll finish on a lovely, although sad romantic legend. On one of my walks around the area I’m staying, Canareggio, I saw this intriguing sculpture of a camel and a young handler in Turkish costume on the side of a rather run-down palazzo (run-down palazzos aren’t exactly thin on the ground here!). I went back to my apartment and looked the house up on Google. It turns out it’s unofficially called the House of the Camel and the legend is that it was built by an exiled Moorish merchant who told his lady love that when she made it to Venice, just ask for the House of the Camel and she’d find him. Sadly, she never turned up. Sob. 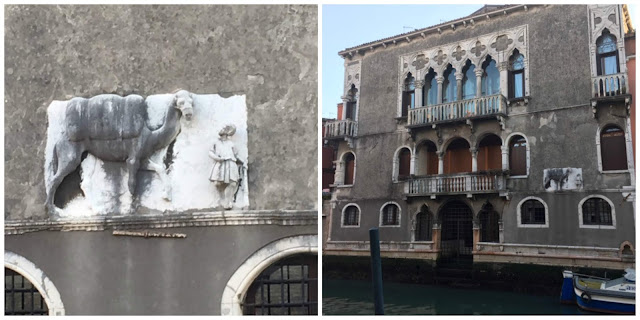 That’s the trouble with legends! No guaranteed happy endings. Believe me, if I was in charge, that Camel House would have seen a wedding before it was done!

My next post will be about Ireland where I haven’t been since 1986! I’m definitely travelling down memory lane this trip. See you in March!

And just to confuse things further, how about a Scottish book as a giveaway? Someone who leaves a comment here goes into the draw to win a download of the first of my Lairds Most Likely books, The Laird’s Willful Lass. No geographical restrictions. Just tell me what legend or fairy story you think is the most romantic and why. Good luck!

Deadline for comments to be entered into the giveaway is 11:00 PM, March 2.

For more photos from Anna's travels, visit her on Facebook.

For more information about her books, visit Anna's website.

Email ThisBlogThis!Share to TwitterShare to FacebookShare to Pinterest
Labels: Giveaway, On the Road with Anna Campbell