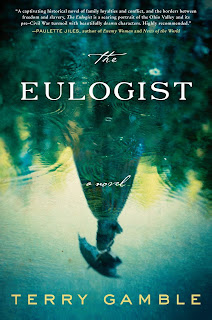 THE EULOGIST is a historical fiction novel set in pre-Civil War America, following Irish immigrants who live in the Ohio River Valley area. Told in the first person of Olivia Givens, who relays the twisted histories of her brothers, James and Erasmus, and her own trials as a woman who is more spinster than wife, who has odd ideas about religion as well as unpopular ones about slavery and women.

The writing showcases a unique and compelling author’s voice, and Olivia’s voice shows a woman who is both hilarious and gritty as she tells the truth as she sees it; however as the story continues and the years pass, there is little humor and triumph, but the grit remains to pursue social justice for those kept in slavery. In the end, there is probably a truthful sort of happy ending, one in which a slave was rescued and Olivia shares what happens to all the family members because she ends up being the one who outlives them all. To her surprise, she becomes the eulogist of the family.

Most of the story is set from the 1820s to the 1840s, so it weaves many historical components competently and naturally in an interesting way. In addition to slavery and abolition, there are interesting insights about the Irish immigrant experience, the rise of evangelism in early America, and the Industrial Revolution in all its glory, with the rise of the middle class and interest in science and medicine as well as reason. There was also the tragedy of the outbreaks of cholera, slave catchers who succeed, and constant fevers that could take anyone at any time--and do. Much of the humor spins around the evangelism side of history as well as the complicated love triangles that seem to crop up. I laughed a lot while reading and admired the author’s writing style and vocabulary.

Basically the story is thus: after their parents die on the journey west, the Givens children, James, Erasmus, and Olivia must learn to fend for themselves. James marries into a prosperous family and builds a thriving business and social standing in Cincinnati. Erasmus, who is plagued by wanderlust, becomes an itinerant preacher, loving and losing the love of his life as he makes his way up and down the river. Olivia--the least marriage minded of the group--surprises even herself when she marries Silas Orpheus, a doctor who is as odd as she is and admires the fact she is not conventional. When Olivia’s husband dies suddenly, she travels to his family’s home in Kentucky and encounters the horrors of slavery firsthand. She is able to help one slave escape to freedom, but her attempt to free a young woman named Tilly results in disaster. Despite this, the family continues to take risks to fight to end slavery, actions that causes ripple effects throughout the rest of their lives.

If you like to read historical fiction outside of a regular historical romance novel, I think this is an excellent choice: compelling, beautifully written, interesting. But there is little romance in it, of any nature, either of love or the good old days. What it lacks in romance though, it makes up for in grittiness and humor as well as a history lesson in the very things Americans still struggle with acknowledging even now. It’s not enough to say slavery and racism is wrong. This is a story about heroes who chose to take action to right those wrongs, which makes it very much a story worth reading.