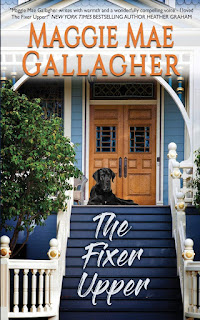 There are some books I love, some I like, and some that are just okay. Then there are those few that I stumble upon and, within the first chapter, get that feeling that the author has written this story just for me. Everything syncs. This was my first book by this author but I had an immediate connection with the characters, the humor took me straight back to my childhood and the things we'd laugh ourselves silly over within my family, and I felt like I had a personal stake in the outcome of the couple's relationship. Gallagher had me laughing one minute, wiping away tears the next, and vigorously fanning myself the one after that. She's hilarious and writes with so much heart as well as some delicious heat. I adored both Abby and Nate and fell head over heels in love with Rufus, Nate's goofy dog. Gallagher really has the Great Dane personality nailed. So much so, that he darn near steals every scene he's in. Then there's the throwback love story featuring Abby's unmarried aunt, told through journal entries (his, not hers), that provides a guiding light for Abby and Nate's deepening relationship. That relationship, between two characters who had already passed on, engaged my emotions just as deeply as the one between Nate and Abby that was playing out on the pages. And yes, there were tears.

Then there are the intriguing secondary characters, both male and female. Gallagher gives them enough page time - and drops just enough delicious clues about each of them - to have me already eagerly anticipating their stories. I'll be returning to Echo Springs for as many books as she decides to write.

This one has my 5-star, feel-good, enthusiastic recommendation.

What's the last book you read that felt like the author had written it just for you?

Have you read The Fixer Upper yet?

Do you have a goofy dog in your life? Tell me about them.

Today's my birthday and you know what that means. Gifts for you! :)

One person who comments before 11:00 PM (EST) tonight will receive a package of books from my conference stash. (U.S. only)