Reviews - - Met Her Match and As You Wish 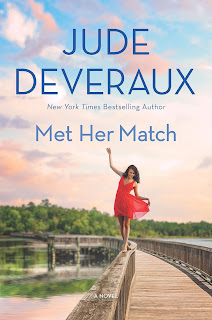 In small towns, no one lets the facts get in the way of juicy gossip…

Terri Rayburn is a girl with a reputation. She doesn’t deserve it, but having grown up on the outskirts of Summer Hill, Virginia, she knows how small towns work. The only way to deal with vicious gossip is to ignore it. So she keeps to herself as she runs the summer resort on Lake Kissel.

When she returns home from a short trip to find a handsome stranger living in her house, she smells a rat. Someone is trying to fix her up, and she has to admit that Nate Taggert is just her type. However, Nate is engaged to the daughter of the mayor and strictly off-limits.

Nate and Terri form an unlikely friendship while he throws himself into life at the lake. As Nate starts to hear rumors about Terri he’s confused. Knowing how smart, beautiful and strong she is, he’s determined to discover the source of the gossip. Terri doesn’t want to revisit the past, but Nate won’t stop until he discovers the truth—even if the truth might be more than either of them can handle.

Set in the beloved fictional town of Summer Hill, Virginia, Met Her Match examines the tensions between the wealthy townspeople, the summer vacationers and the working-class people who keep the town and resort running. Told with humor and heart, Met Her Match is the perfect summer escape.

I am biased when it comes to Jude Deveraux. Aside from a few books in the late 90s, I pretty much adore everything she writes. At a RWA in New York, I attended her workshop and got a page of paper with her book notes on it--for which book, I am not sure. It could be a book that never even got published, but it has her handwriting on it...and I think it’s brilliant. I feel similarly about J.K. Rowling. We all have an author we are biased about, yes?

Thus it will not surprise anyone that I thought this book was hysterical and romantic and pure Deveraux writing gold. I’d read this book at lunch; and when the break was over, I’d go next door to my co-worker (who finds romance novels too hilarious to actually read) and would summarize what was going on, reading the best lines to her. One of these meetings, my boss was also there--and I read aloud about a scene where Terri has had it with Nate’s behavior, acting as if he’s been stringing her along, that he had been using his body to toy with her emotions when he was engaged to someone else--and thus she gets revenge by parading about in a miniscule bikini while having two men fawn over her, all while Nate is unable to unswallow his tongue. My boss actually laughed out loud (and he has even less approval of romance novels than my co-worker) and said he felt jealous on Nate’s behalf.

I know this is classic Deveraux. The hero acts on behalf of the heroine, being all chauvinistic in the process, and the heroine proves that she doesn’t actually need him to rescue her, thank you very much, even if it almost kills her, and eventually they talk to each other rather than at each other or use sex in lieu of talking--and voila! They argue their way into a happy ending. I adore this. I’m looking for my own Montgomery hero to run off with--though I suppose I’d make do with a Taggert, if needed. (I’ve always liked my heroes scrawnier than a Taggert.)

The first half of this book is the classic Deveraux romance. The second half is solving a mystery that would seem unconnected to the story at all, if the mystery wasn’t the heroine’s mother. When I was reading the book the first time, I remember hints that made me wonder what that had to do with the funny classic Deveraux romance I was reading--and then when the romance seemed to wrap early and the mystery revealed itself, I was like ah-ha. But sometimes it did feel it was two different stories going on and they weren’t always smoothly aligned. I went with it because the story kept me vested; however, I realize some readers might find this kind of storytelling disjointed. In fact if you read the blurb, there’s no hint of a mystery to solve--so you may go, “What are you talking about?” Believe me, there’s a mystery. It’s a doozy!

The other classic aspect of this story is the Montgomery Effect. I’m not sure if that’s actually the term for it, but it’s where one of the rich Montgomeries (in this one, Kit Montgomery) uses his power and influence to get what he wants. Namely his son Rowan together with the mayor’s daughter, Stacy. Except Stacy is already engaged to Nate. You see where it gets complicated..

The Summer Hill series reminds me a lot of the Edilean series, which are some of my favorite books of Deveraux’s. And this one made me go back and read the other two books in the series, THE GIRL FROM SUMMER HILL and AS YOU WISH. Reading them all made me appreciate this one even more. You definitely don’t have to read all of them to understand what is going on--though in the love story of Kit Montgomery and his wife Olivia, reading all of them does help clarify some things.


AS YOU WISH
by Jude Deveraux
Publisher: MIRA
Release Date:
Reviewed by Hellie 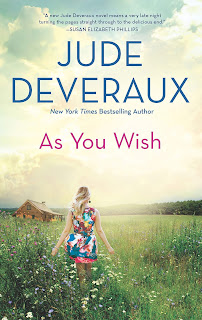 New York Times bestselling author Jude Deveraux returns with the highly anticipated third installment in her beloved Summerhouse series, where three women have the coveted opportunity to answer the age-old question: What would you do differently if you could do it all again?

One fateful summer, three very different women find themselves together in Summer Hill, Virginia, where they find they have much more in common than they realized…

Sixty-year-old Olivia’s first marriage was long and unhappy, but now she is a newlywed, thrilled to finally be starting her life with the man she’s always truly loved—even if they are getting a late start. Kathy is in her forties and married to a handsome, successful businessman. Theirs would be a fairy-tale romance if it weren’t for one problem: He’s passionately in love with someone else! Twenty-something Elise is also in a troubled marriage, stuck with the man her wealthy parents chose for her. Now that he has a pregnant mistress, he seems willing to go to drastic lengths to take Elise out of the picture.

Though each of them wound up at the Summerhouse for separate reason, it’s not long before they begin to open up about their regrets, their wishes and their dreams. And when they’re presented with the opportunity of a lifetime—a chance to right the wrongs of their past—all three discover what can happen when dreams really do come true.

A heartfelt, magical tale, As You Wish is a shining example of Jude Deveraux’s enchanting storytelling that will charm longtime fans and delight a new generation of readers.

This book is divisive. I don’t think it’s a book that people are going to feel Meh about. They will either really love it or hate it. There will be no in-between. I am in the Love It Camp. I thought it was funny and romantic--and who hasn’t had a time in their life they wished they could go back in time and “redo” it? So if you’re of the mindset that regrets should remain regrets and we shouldn’t change the past because we are who we are--this book is a big PASS for you. The book is called AS YOU WISH and there is a lot of wish fulfillment in it.

Another aspect that may annoy many readers is that all the characters at the start of this are married. Olivia is married to the man she’ll be married to at the end again--but the other two are married to other men they don’t love and who don’t love them. One of the heroines is in love with another man. The third isn’t in love with anyone, but does wish her husband would man up and leave her already because he does have a girlfriend. Many readers will be, “Why didn’t they leave their husbands? Why wait for them to do it?” I would say it’s that the story is more about the heroines all becoming worthy heroines than about finding the right men.

Elise is the only child of parents who expect her to be married to the boy next door, even if he’s keeping a mistress and their children in a separate life. Olivia had a previous marriage with a man who used her, blamed her for everything, and then left everything to his mistress and children when he died. Kathy is married to a man who doesn’t find her attractive but does love her. Through him, Kathy is able to get approval from her father, however tiny the amount actually is. All of them are approval seeking, carrying guilt that is not theirs, and afraid of making too much noise and being denied love altogether, due to their experiences up to this point. So...no...they’re not going to leave their husbands because if they even try--as Elise did--they’ll be thrown into an asylum.

They each get to travel back into a moment in their past and spend three weeks there creating a new present. They can only truly fix themselves...so what would they do differently with the knowledge of wisdom they have now? I mean, wouldn’t we all do that? (I mean, I might--but never to my teenage-hood. I would NEVER go back to that era. Once was enough suffering for anybody.)

I would say I was probably disappointed that Kathy’s story was sacrificed for the sake of the other two. I did want to know more about her and Cal. But since it was already at 400+ pages, and this story was really more about Olivia and Kit than the other two couples, I think this was just how the story was meant to be told. I do recommend it--but with caveats. :)


Are you a Jude Deveraux reader? If so, which men rev your engine: Montgomery or Taggert?

If given the opportunity, would you go back in time for a "re-do?"

Posted by pjpuppymom at 9:58 AM