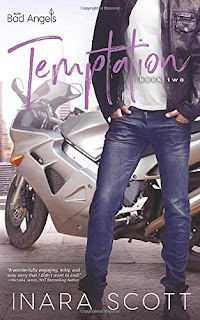 As close friends and coworkers, attorney Zoe Riva and tech genius Connor Ashton know they can never get involved.
Never.
Ever.
Until a scooter accident lands Zoe in Connor's arms—and his overnight custody—and she starts to see a man she's never seen before. With her career and her heart on the line, Zoe can't afford to take any chances. But when combustible chemistry takes over, even the smartest people in the room can make the biggest of mistakes…

I am having so much fun getting to know the group of friends in Inara Scott's Bad Angels series. I want to hang out at their favorite bar, sip whiskey with Connor and Zoe, pet sit their pups, and get to know all of them better. I don't know how many books Scott has planned for this series but I hope it doesn't end anytime soon!

I really enjoyed Connor and Zoe. They are confident and accomplished, but also realistically flawed. Both have complicated family backgrounds that have shaped their lives and influenced their actions, both hold their personal histories close to the chest, and neither of them is looking to start a relationship...but fate, and an ill-advised scooter ride, have other ideas. I really liked these two together and was cheering for a happy ending throughout their journey.

Scott slowly reveals each of them to readers as they reveal their true selves to one another, along with a few self-revelations, pulling in other characters along the way but keeping the focus on the leads. Even the scenes with Connor's mother and her (retired scientists), cut-throat, card-playing friends (I adore these women!) help to dig deeper into the characters of both Zoe and Connor while continuing to move the story forward. And, speaking of Connor's mother, I really enjoyed her character arc and the poignant evolution of her relationship with her son.

The chemistry between Connor and Zoe sizzles, the banter is fast-paced and witty, and their deepening emotional connection had me sighing with satisfaction. The "bro dialogue" among Connor and his business partners is spot-on for guys who've been friends since college and I enjoyed their interactions immensely. I can't wait to see what Scott has in store for these Bad Angels next!