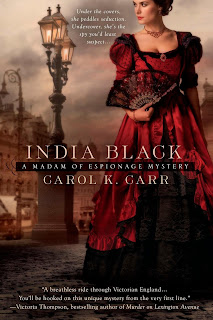 When Sir Archibald Latham of the War Office dies from a heart attack while visiting her brothel, Madam India Black is unexpectedly thrust into a deadly game between Russian and British agents who are seeking the military secrets Latham carried.

Blackmailed into recovering the missing documents by the British spy known as French, India finds herself dodging Russian agents-and the attraction she starts to feel for the handsome conspirator.

I stumbled upon this “how did I miss this?” gem while at the library, and the opening line grabbed my attention so thoroughly, I put aside some much needed review reading to read this instead.

My name is India Black. I am a whore.

Still, an opening line is no good without a compelling voice and the kind of wordsmithing to prove your great hook, and Ms. Carr delivers. I cracked up as India first said if you’re virtuous, you’ll put this book aside, glare at the shop owner, and then go home and sleep guilt free; but if you weren’t, but were intrigued and were hoping for a treatise on whore’s tricks, you would be sadly disappointed and the book would cost much more if it had been.

By the time India sets the stage for what her book will cover, we’re introduced to a successful brothel madam who was looking forward to an evening of making sure her employees weren’t giving discounts to their favorite customers, but instead has to figure out how to dispose of the dead body of a frequent customer without news getting out to other brothels, leading to India’s establishment getting raked through the mud. But it’s no ordinary dead body. It is the corpse of someone who works for Queen Victoria’s government, and he had been carrying state secrets when he keeled over. Except no one knows where the documents have gone.

French, a government agent who works with PM Benjamin Disraeli, blackmails India--who was working to discard the corpse far, far from her place of business--into helping him recover the documents. What follows is a kidnapping, a near death experience at the Russian embassy, and a cross-country chase in the bitter cold to catch the bad guys before they get to Dover (to escape to France.) It’s fast paced and fun and the writer’s voice and wordcraft is to die for. If you are fan of British history, this is your series. The historical details are gritty and thoughtful and will make you want to research more about what you’re learning. The scenes with the Prime Minister Disraeli steal the show--and the line where Disraeli calls his nemesis, Gladstone who wants to become PM, “God’s Only Mistake” made me laugh out loud--and then made me laugh louder when I learned he had actually said that.

The voice of India Black is cheeky, resourceful, and just the sort of voice of a woman who will lead you on a merry romp. I can’t wait to read more of the series. My only concern is that there are only about four books that I was able to find, but I’m not sure what has become of the author, Carol K. Carr. But I’ll worry about that once I get the series read...in the meantime, I’m off to locate the next one, India Black and the Widow of Windsor.