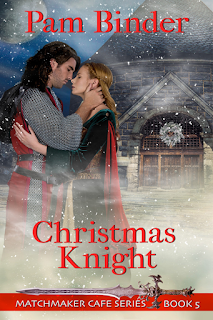 Colin Edward Penrose, a knight from fifteenth-century Glastonbury, England, must solve the riddle of his family's curse and marry a woman out of time—or lose his ancestral home. With a matchmaker's help, he meets a woman to whom he feels an instant attraction, but he knows the curse makes falling in love dangerous for her.Madeline Murphy, defense attorney in a prestigious law firm, needs a date for her family's Christmas Eve party. In desperation, she turns to a matchmaker for her knight in shining armor. The man supplied exceeds her wildest fantasy but vanishes without a trace. A year later she needs a date for her mother's wedding, and she asks the same matchmaker. One problem: In order to find her mystery man, she must travel through time.

Excerpt from CHRISTMAS KNIGHT
For exclusive use of The Romance Dish

The Romani had buttoned up for the night. Children were tucked in bed, the food and tables put away, and the fires banked for the night. Guards patrolled the grounds and men and women took turns tending the fire throughout the night. The message was clear. If they needed to leave in a hurry, all they would have to do is hitch the horses to the wagons. They were a nomadic tribe, distrusted and feared because they were different. Without warning, and sometimes without cause, other people might attack and try to drive them away. They had to be ready.

When they reached the wagon she shared with Aunty Florica, Madeline took the blanket from
Colin’s arms.

“Madeline …” He closed his eyes, and when he opened them, he said, “If you were mine, I would never leave you.”

The words were impossible. Merlin's Curse stood between them and made her feel as though a cloud hovered over them. She knew he meant every word. She also held onto too many secrets for Colin's words to become reality. What would he think if he knew she was from the future and had come here with the silly idea of searching for a date while he battled issues that had real-life consequences?

Making her decision, she let the blanket fall to her feet. She leaned up until his mouth was a breath away from hers, his eyes clear and honest in the starlight. Her life in the twenty-first century was the dream. This was the reality she wanted to live.

Repeating the words he’d spoken, she said, “If you were mine, I would never leave you.”

Colin’s arms wrapped around her waist, crushing her against him. His mouth heated hers, and the world disappeared.

If you could time travel to any time and place, when and where would that be and why?

Who do you consider to be your heroic Christmas Knight?

Three randomly chosen people who post a comment before 11:00 PM, December 17, will receive a trade paperback or e-book (winner's choice) copy of CHRISTMAS KNIGHT from Pam Binder. (Must be 18 or older) 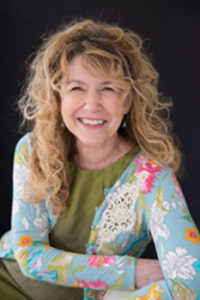 Fantasy, young adult and romance novelist in one package—that’s Pam Binder, a New York Times and USA Today bestselling author with 10 novels and one novella to her credit.

Consistent in Pam’s novels are time-bending flights of fantasy, other-worldliness and a reverence for history, with an emphasis on Celtic legends and anything Irish or Scottish. She crafts each novel to support her branding statement that “Time is an illusion and love, the only reality.”  Her next latest time travel novel, CHRISTMAS KNIGHT, is a November 2019 release and the fifth story in her Matchmaker Café series with The Wild Rose Press, Inc.

A Seattle-area resident, Binder is president of the Pacific Northwest Writers Association and annually chairs the group’s Pacific Northwest Writers Conference. Devoted to helping aspiring authors succeed, she teaches two year-long courses, "Write Your Story" and "After the First Draft.” She also presents frequently at reader writer and library conventions. Among her many honors is RT Book Reviews’ Lifetime Achievement Award.
For more information about Binder, visit www.pambinder.com.