Review - - Not the Girl You Marry

NOT THE GIRL YOU MARRY
by Andie Christopher
Publisher: Jove/Berkley
Release Date: November 12, 2019
Reviewed by Hellie 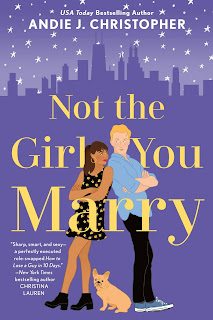 Jack Nolan is a gentleman, a journalist, and unlucky in love. His viral success has pigeon-holed him as the how-to guy for a buzzy, internet media company instead of covering hard-hitting politics. Fed up with his fluffy articles and the app-based dating scene as well, he strikes a deal with his boss to write a final piece de resistance: How to Lose a Girl. Easier said than done when the girl he meets is Hannah Mayfield, and he's not sure he wants her to dump him.

Hannah is an extremely successful event planner who's focused on climbing the career ladder. Her firm is one of the most prestigious in the city, and she's determined to secure her next promotion. But Hannah has a bit of an image problem. She needs to show her boss that she has range, including planning dreaded, romantic weddings. Enter Jack. He’s the perfect man to date for a couple weeks to prove to her boss that she’s not scared of feelings.

Before Jack and Hannah know it, their fake relationship starts to feel all too real—and neither of them can stand to lose each other.

This book was a bit of a mixed-bag for me. There were parts I really liked, things that made me laugh, characters I enjoyed, and some scenes and character growth that I thought were very well handled, that made me think about things differently. I also loved the premise of a flipped script of HOW TO LOSE A GUY IN 10 DAYS. Those things are the reason I give this a 4 star rating.

But...there’s always a but, isn’t there?...there were things I didn’t enjoy so much. I found the heroine a bit on the unlikable side, the hero a bit on the too fantastical side, and the writing style not as funny as I hoped. Humor, of course, is subjective, so the brand of humor this book employs may be more your cup of tea. I hope so because the parts I liked, well, I hope other people come to enjoy them as well. I wanted to love a heroine who was A Bit Much, because I too am a bit much--and don’t we all want to be loved and accepted for who we are without being made to feel we need to be someone else to be worthy of love? Ironically though the heroine was A Bit Much for me.

If I could compare this author’s writing voice to another bestselling author’s voice--it’d be Tessa Bailey. If you enjoy Tessa’s books, I think this would definitely be a book to add to your list of Must Reads for Fall 2019. I, myself, do not care for Tessa Bailey’s author voice because I think her heroines sound too crass (which believe me is ironic for me to be sniffy about when others would likely accuse me of being just that.) But another way to interpret these heroines are those who are not afraid to own their sexuality, be honest rather than polite, and live authentically.

However, that is not how I interpret those heroines to be--and for me, this sort of characterization and writing slowed my reading of the book until I dragged it out by another two weeks. I finished it; it was good--but I wouldn’t take it with me to an island. (If I graded this book by how I felt about the heroine for most of the novel, I would have given it a 3.) However, after a few days rest and picking up for the final few scenes, I found much to be charmed about the story. As I said: a mixed bag.

Once again, I enjoyed this was a book with a heroine I feel we don’t see a lot of in mainstream romances: a woman of color; and I also enjoyed that the hero is just a really nice guy. There’s no alpha edge about him, though he’s still sexy as hell and I certainly didn’t miss it. The secondary characters are very delightful and add much to the growth of both of these characters. And for a remake of a beloved rom-com, I think the story itself was well done.

Posted by pjpuppymom at 9:06 AM