Review - - Someone to Remember 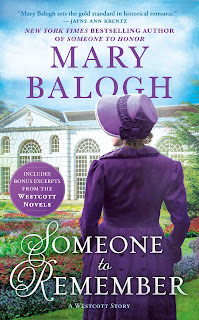 I’m a total sucker for a continuing saga. I’m that reader who wants to know what happens to the brothers, sisters, aunts, uncles, children and distant relations. I want a happily-ever-after for all of them. And Mary Balogh delivers on all counts.

Her most recent series, The Westcotts, is filled with intrigue, deceit, secrets and most of all romance. There are now a total of seven Westcott books to give you hours of reading enjoyment. Whether you’re lounging in your coziest reading chair, or riding the subway to work, you’ve got a lot to look forward to.

In the latest installment of the Westcott Family Saga, the novella, Someone to Remember, the author has taken Matilda Westcott, a secondary character from the previous books, and shone a spotlight on what had become the hopelessness of her life.

Matilda is an aging spinster destined to stand in the shadows watching everyone around her find happiness while she cares for her Dowager mother. Any hope of an independent, fulfilled life was squashed thirty-six years ago, when her parents forbid her to marry the one man she loved, Charles Sawyer.

The ensuing years weren’t kind to either of them. While Charles went on to marry another, he never loved again. As for Matilda, the loss of Charles proved to be too much, and the once vivacious young woman, interested in life, retreated behind a docile façade, becoming an overly fussy companion to her mother. In short, they both lived lives they endured, rather than enjoyed, until years later when they unexpectedly found themselves attending the same dinner party.

Surprisingly, old emotions resurfaced and Charles becomes determined to win Matilda back. The question is, can he breakthrough the wall she’s built around herself and strip her of the notion that it’s never too late to fall in love?

The story arc is multi-layered with confessions and reconciliations, as Charles tries to win Matilda back and create a relationship with his illegitimate son. Truths are hard won in this lovely story of love lost and second chance romance.

When Matilda and Charles finally rekindle their love, the courtship is swoon worthy. It’s sweet, kind, tender and oh, so romantic. I do believe you can read this novella without having read the series. But the series is richly filled with characters and intrigue you shouldn’t miss.

As a final note - it was refreshing to read a romance where the hero and heroine were in their ‘mature’ years. After all, one is hardly dead at fifty, and I wish there were more romances written with heroines in their 40’s, 50’s and 60’s. Just saying.