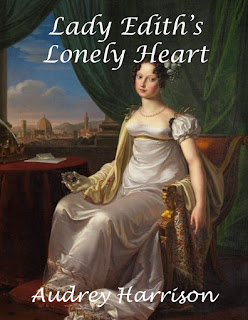 She is under pressure to find a husband she doesn't want.

He keeps to the fringes of society because of family constraints.

Will the written word be enough to bring two lost souls together?

Lady Edith Longdon is an heiress, in danger of being classed a spinster, and disillusioned with the fops, dandies, and fortune hunters surrounding her in society. Deciding it’s time to take her future into her own hands, she devises a foolproof way of finding someone she can love. She's convinced nothing could go wrong…

Lord Ralph Pensby, overwhelmed by a sense of obligation, and with no one he can turn to, is adrift from those around him…

Two people drawn together, both on a journey which will affect them in ways they could never have foreseen. Secret correspondence, mistrust and confusion, not to mention cads of the highest order, make this novel a fast-paced, heart-warming story, with appealing characters and a strong sense of time and place.

I was intrigued by the premise of this book and eager to give it - and the new-to-me author - a try. I appreciated the fact that Lady Edith is a bit older (23) and knows her own mind. I understood her frustration with her place in life but there were more than a few times when I lost patience with her. Then there's the hero. I've never been a fan of a mama's boy and, even though Ralph has good reason to be concerned about his mother, the author paints a picture of their relationship that would have me running in the opposite direction...though I did like his mother. And he does come around in the end. Don't even get me started on Lady Edith's mother, though. What an awful person.

This book has a good story line, with plenty of potential, but I wanted more, especially as pertains to the characters. I needed more development, less tell and more show. I wanted to feel their emotions rather than be told what they were feeling. I needed to engage with them but I struggled to feel the connection...except within the letters the hero and heroine exchange. Within those missives, the author does a good job of exploring beneath the surface of the characters and showing the motivation for their actions but those letters comprise a very small part of the book.

If you enjoy regency romance with traditional roles, formal dialog and limited physical chemistry (a few kisses), this might be a good book for you. I was left wanting more depth, but that's just me.

Audrey was born about two hundred years too late. She wants to belong to a time when men were men and women were dressed in gowns and could float, simper and sigh.

In the real world she has always longed to write, writing a full manuscript when she was fourteen years old. Work, marriage and children got in the way as they do and it was only when an event at work landed her in hospital that she decided to take stock. One Voluntary Redundancy later, she found that the words and characters came to the forefront and the writing began in earnest.

So, although at home more these days, the housework is still neglected and meals are still late on the table, but she has an understanding family, who usually shake their heads at her and sigh. That is a sign of understanding, isn't it?