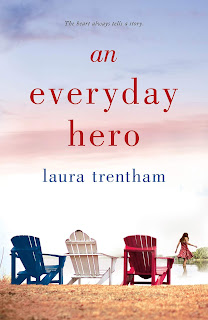 At thirty, Greer Hadley never expected to be forced home to Madison, Tennessee with her life and dreams up in flames. A series of bad decisions and even worse luck lands her community service hours at a nonprofit organization that aids veterans and their families. Greer cannot fathom how she’s supposed to help anyone deal with their trauma and loss when everything that brought her joy has failed her.
Then Greer meets fifteen-year-old Ally Martinez, a gifted girl who lost her father in action and now hides her pain behind a mask of sarcasm. But Greer sees something undeniable that she can’t walk away from. To make matters more complicated, Greer finds herself spending more and more time with Emmett Lawson―a man with both physical and emotional scars of his own. When a situation with Ally becomes dire, the two of them must become a team to save her―and along the way they might just save themselves too.

In An Everyday Hero, Laura Trentham brings readers into the lives of three people who are all in pain but, when brought together, just might be able to save each other...and themselves. Greer invested her whole life in her single-minded pursuit of a music career only to have it all spectacularly crash and burn in the midst of a panic attack. Returning home to her small town looking for solace from her boyfriend, she instead finds him pants-down with another woman. Is it any wonder she goes a little batsh*t crazy at the local bar when someone plays Carrie Underwood's "Before He Cheats," and finds herself before the local judge (who also happens to be her favorite uncle)? She expects a light fine, maybe highway trash pick-up, but instead he sentences her to volunteer hours at a local musical therapy center. Music. Her greatest love, greatest failure, and greatest fear. She is not a happy camper which, of course, makes her the perfect person to be assigned to two others resistant to the center's efforts: Ally and Emmett.

Athletic and handsome, Emmett was the golden boy of his hometown who went off to war to uphold his family's tradition of service but came home severely wounded, both physically and emotionally, and is well on his way to closing himself off completely from his friends, his family, and life. I ached for him and for his parents who have no idea how to reach him. Fourteen-year-old Ally is a heart-breaker. Her father is dead, killed in service, her mother has lost the ability to cope following his death, and Ally is so consumed with anger and grief she fairly vibrates with it, the walls she's erected around herself, practically impenetrable. I wanted to wrap my arms around her and take her pain into myself but what Ally needs is something else.

I found Greer, Ally, and Emmett all so very realistic and relatable, quickly becoming invested in each of their stories. Processing pain, and grief, are very personal endeavors and Trentham excels at creating those individual journeys on the page while, at the same time, intricately weaving them together as a whole. Greer is the catalyst that puts both Ally and Emmett on their individual paths to recovery, eventually bringing them together in a surprising way but Greer is on her own path as well and as much as she helps them, they help her in return. I liked Greer and I loved the (totally different) relationships that form between her and Emmett and her and Ally. You can feel their pain - Trentham doesn't sugarcoat it - but there's also hope, humor (especially between Emmett and Greer), heart-tugging romance, and deep friendships that form as they all sort through the fears and feelings that are keeping them from moving forward.

An Everyday Hero is a story of second chances, redemption, forgiveness, reconciliation, and love. Its a story of overcoming the challenges faced by wounded veterans and by military families left behind. And it's a story of healing, friendship, acceptance, and finally finding the path we're meant to travel. I laughed, I cried, and I turned the final page so grateful to have met these wonderful characters through Laura Trentham's deeply emotional storytelling. It's a book I highly recommend.

Have you read any of Laura Trentham's books?

Do you enjoy books with military themes or characters?

Tell me about the last women's fiction novel you enjoyed.

One person who posts a comment before 11:00 PM, February 7, 2020 will receive a print copy of An Everyday Hero.