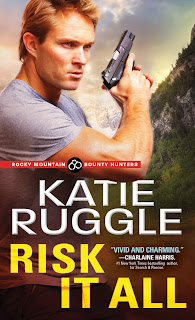 Cara Pax never wanted to be a bounty hunter. She’s happy to leave chasing criminals and tackling skips to her sisters. But if she wants her dreams of escaping the family business to come true, she’s got one last job to finish... Only problem is, she doesn’t think her bounty is guilty.
Henry Kavenski is a man with innocence to prove. When he realizes that Cara believes him, he’ll do anything to keep her out of harm’s way. Escaping criminals and dodging cops might not be the best time to fall in love, but Henry and Cara won’t give up, not when there’s a chance at a new life ahead—if they can survive the fall.

Katie Ruggle has been on my auto-buy list since her first series. I love her well-developed, out-of-the-box characters, tightly-woven suspense, edge-of-the-seat danger, and fast-paced story lines. I love the overarching mystery that begins in the first book of each series but doesn't conclude until the last, keeping me eagerly returning for each book in the series. She pulls me into each connected group - family, friends, co-workers - that populates her various series, creating a fascinating dynamic that engages me emotionally. But, I have to admit, of all her series, so far, I'm enjoying these five bounty hunting sisters the most. I love how they interact with and support one another, the banter, humor, and sass in their relationships, and how they are each a unique, different personality but mesh together into an unbreakable, loving unit. And I love their dog. I so love their dog!

Cara is the sweet sister everyone protects. She's the one who stays behind to do computer research when she's not in class working toward a degree to fulfill her dream of being a kindergarten teacher (a dream their mother has successfully delayed too many times), all of which makes her the least likely sister to go after a suspected murderer on her own. Which, of course, makes this book all the more interesting when she and Henry are forced to go on the run.

I really enjoyed these two together. Ruggle ratchets up the tension, sending them into the wilderness in a race for their lives where they're forced to depend on one another. The romance portion is a slow build, making it much more realistic considering the circumstances, while the danger is high intensity. Cara is one of my favorite Ruggle heroines. I really enjoyed watching her come into her own during this story. I love how protective Henry is of her, in both action scenes as well as personal ones. And, speaking of Henry, I was right there with Cara, hoping Henry would turn out to be innocent of the charges against him but still wondering how it would all turn out right up until the reveal. Kudos to Ruggle for story telling that kept me guessing. I love when an author accomplishes that.

Risk it All is the second book in this series and will stand on its own but to better understand the overarching mystery, the dynamic among the sisters, and the precarious position their law-breaking mother has put them in, I recommend readers begin with the first book in the series: In Her Sights.