Review - - To Bed the Bride


TO BED THE BRIDE 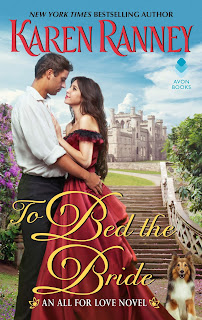 Politics has introduced MP Logan McKnight to many fascinating people, but the lady he encounters on the lands bordering his ancestral Scottish home outshines them all. Eleanor Craig of Hearthmere seats a Thoroughbred like a queen, knows as much about world events as any of his colleagues—and is engaged to one of the worst men Logan knows. She also seems lonely, so Logan brings her a friend. Thus should their acquaintance end, yet it’s only just begun.
The puppy Logan delivers is every bit as irresistible as the man himself. How could this stranger sense the isolation Eleanor suffers among her scheming, snobbish extended family and fiancé who control her life? It’s even worse in London—until she begins meeting Logan secretly in a secluded park. Their passionate connection frees Eleanor, body and soul. But discovery threatens disgrace—or worse.

I have not read the other books in this series, but this book stood by itself without needing to read the other books to enjoy the romance. What I enjoyed most about this book and setting is how realistic it felt for the heroine, who would have had limited choices and also expectations of her as a single young woman (i.e. you must marry.) I can get a little put out with “modern” historical romances that have the heroine wishing to experience carnal love without the fear of consequences (which would be severe for the woman) or who wish to marry only for love, when they come from the upper classes where love meant less to the marriage than compatibility or adjoining land, etc.

I know, I know: it’s romance! It doesn’t have to be real! Still, I think this is a good balance between more realistic in how the heroine is drawn and thinks in her time period and also being a more modern heroine who seizes control of her fate and does something different. This is what happened here. Eleanor is well aware she is engaged to an earl--which is a good thing, which everyone wants, even her once upon a time--but now that the wedding details are commencing, she’s realizing more and more that what she thinks she’s getting is not it at all. In fact, her fiancé has very specific requirements of her--and the reason he picked her to be his wife is because she’s so biddable.

But our author shows us that a heroine who is as quiet and demure as Eleanor is can be far from being actually biddable. I also enjoy that as a trope as well in reading romances: the underestimated heroine. The heroine everyone dismisses because they’re too shy, too ugly, too bookish. Eleanor is average in looks, average in gregariousness, just average. Thus her fiancé Michael is a bit put out when his supposedly biddable bride will not part with her new dog that her Scottish neighbor has given her because he thought she looked lonely.

And you know if the one you plan to marry doesn’t like dogs--that pretty much tells you everything you need to know about him as a person, right? Not to mention, her family--which Eleanor keeps sacrificing things for to make happy (to no avail because they don’t know how to be happy)--hate the dog too. I don’t know how. Bruce is a most adorable border collie mix.

By the time Eleanor makes a true play of resistance to the marriage, the family (as well as Michael) turn on her in such a way that one can easily see this is how misbehaving women of the time period were treated. Punish them until they give in. Fortunately with help from the hero and Bruce, things all work out in the end. (In fact, I really like how the end worked out. I thought it served her family right--just how well it worked out for Eleanor--after they cut her off for not doing what they wanted. *LOL*)

The hero, Logan, is a delight--the kind of government official you want in office. Someone who fights for the common man, for basic human rights. The friendship that grows between Logan and Eleanor is so natural and authentic, you can’t help rooting for them. Watching a relationship unfurl from real kindredness and friendship almost feels like a change of pace in current historical novel writing trends. There is no doubt to the chemistry between them, but they build the friendship first.

The author includes a note about how women’s property was treated once they were married. It explains a bit about a plot point in the book and will make you grateful that’s no longer the case now.

I plan to go back and find the rest in the series. I think they will be just as delightful.