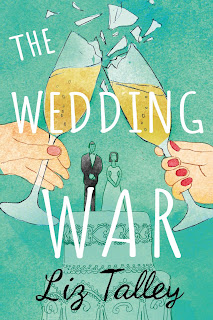 Once upon a time, Melanie Layton and Tennyson O’Rourke were inseparable—but their friends-4ever promises were shattered when an explosive secret was revealed at Mel’s wedding, a secret that destroyed her family. The two haven’t spoken for the past twenty-some-odd years, and they’d be happy if they never crossed paths again.
But now Mel’s daughter and Teeny’s son have fallen in love—and announced their engagement.
Which means the two women must tolerate one another and play nice long enough to plan their children’s dream wedding. From the beginning, they clash. Melanie imagines a classy, elegant event, in keeping with tradition. Teeny’s vision is a bit more extravagant, and thanks to her habit of marrying well, she’s got the cash to plan the flashiest wedding of the season.
Complicating matters are the men in their lives: Tennyson is falling for the wrong guy, and Melanie is trying to hold on to a flailing marriage. Amid the flurry of cake tastings, dress fittings, seating charts, and bridal showers, Mel and Teeny confront their past mistakes—with twenty years of pent-up drama.
When the day of the wedding finally arrives, their friendship might just be something old and something new.

I have the feeling this is going to be one of those books that readers will either love or hate (I enjoyed it). It's a poignant, humorous, and sometimes shocking look at the lives of two women, childhood best friends, who, after a life-changing betrayal, are brought together once again when their children fall in love. The characters are not always nice and some of their antics would have even Reality TV housewives doing a double take. I don't know if I would have ever been able to forgive the betrayal that ended their friendship but, in spite of that, I couldn't help but hope that there was still goodness lurking in the depths of one and strength to be found in the other. And, as dysfunctional as their relationship was, I really hoped that they would be able to find a way to, if not repair their former friendship, at least forge a new one going forward. The resolution Talley created is one in which I was able to believe and appreciate.

Teeny and Mel are flawed, complex women who took me on quite the emotional ride. I laughed, cringed, laughed, gasped, cringed some more, and also shed a few tears before reaching the end of their story. It's a humorous, sometimes heartbreaking, frequently over the top, no holds barred look at a friendship that's gone off the rails, but just might find its way back on track, and I could not look away.