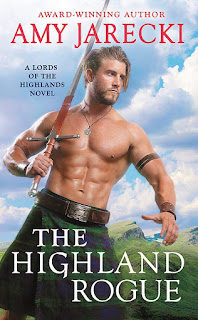 After a vicious attack on his ship, Sir Kennan Cameron washes ashore on a deserted Scottish island, nearly dead. But he soon finds he's not as alone as he thought. Kennan knows he can't stay on the island, but neither can he leave the brave and bonny lass who has nursed him back to health -- even if she is from a rival clan.

Abandoned by her family, Divana Campbell is both terrified and relieved when a rugged Highlander drags himself from the surf. Trusting Kennan is her only chance for survival -- and by the time they arrive at his castle, she can barely imagine life without him. But as the heir to a powerful chieftain, Kennan could never marry the likes of her.

Together, they'll brave tempests, pirates, betrayal, and ruin. But soon Kennan must decide what matters most: his thirst for vengeance or the woman who's won his heart.

This book grabs you from page one and does not let go. I have read several of Jarecki’s books--and though they are more hit than miss for me--this one is easily my favorite in the series. The more I read, the more I was impressed by the characters, the pacing, and the plot. In the first chapter, the hero’s ship is taken by pirates--and the crew is lost--and you think the hero will be lost (but obviously can’t be--we know he’s the hero!) Then the next chapter shows us the heroine, a young woman who has been exiled to an island to die because she and her family had had smallpox, but she’d lived and had been surviving there for two years. Who are these characters? The hurdles these two overcome are riveting.

Kennen takes Divana with him when he’s able to get a ship to come save them, and he takes her to his family home, promising her a life better than what she had, one with all the blankets and food she could want. It’s clear that he as a laird-to-be and she a young woman of very humble circumstances would never work out to be together, and this conflict of the Lord and the Maidservant is a hard one to overcome in an era where young lords married women of wealth and land. Both characters deeply know they can never be together in that way, but they cannot help but be drawn to each other. For Divanna, she knows she loves him and a life with him would be unheard of, but she is willing to be with him in whatever capacity.

When Kennan is healed enough to return to the seas to seek revenge on the pirate who nearly killed him, he is surprised to find a stowaway, the sweet and troubling woman who saved him more than once in their short time together. He disguises her as a cabin boy (ha, ha, ha!) and the crew sails on, on the tail of Jackson Vane, determined to get back the stolen treasure as well as kill the man who betrayed Kennan to Vane in the first place. Divana soon finds her stride on the ship; and it’s not long before she and the Captain are sharing more than sleeping quarters.

When Divana is kidnapped by Jackson Vane, Kennan truly realizes how important she is to him--and that when he gets her back, he will move heaven and earth to keep her. It is ever so satisfying...and Divana is really the perfect match for Kennan in every way. I highly recommend.