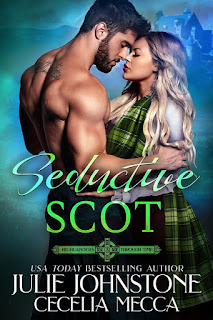 He crossed time on a mission to rescue his family but discovered the one woman with the power to save him.

Reikart McCaim doesn’t want to be saved—despite the fact that he’s a time traveler from 2020 New Orleans stuck in medieval Scotland. He holds his jagged secrets close to his chest and wants to keep them that way. Even if he could open up to the incredible woman fate has tossed in his path, they’d both be shredded by the things he can’t let go of. Still, he needs her help. In his time, his father lies in a coma with only one wish: to see Reikart’s mother again, whom he’s always claimed was a time traveler pulled back to her true time. Two of Reikart’s brothers already traveled back to search for her, but they are missing, too. Now, Reikart must find his family and secure the magic cross they need to return to their time. And the lass who is everything he wants but cannot allow himself to have is the only one who can recover it.

Deirdre Irvine’s life is a disaster, and it’s about to get a whole lot messier. She’s been betrayed by her brother, and she finds herself unwittingly embroiled in a plot to gain control of the Scottish throne. Not to mention she’s harboring enormous guilt over failing the sister she adores. So when the unexpected chance to prove herself to her sister arises, Deirdre will do anything to use the opportunity to her advantage. It doesn’t matter that it means putting herself in danger and joining forces with a man who claims he’s from the future. But she is woefully unprepared for the jeopardy he puts her heart in.

For a scarred man and wounded lass, their greatest obstacle may not be the centuries that divide them, but the walls they’ve erected themselves. As Deirdre’s and Reikart’s lives intertwine and they’re confronted with dangerous enemies, she’s about to discover a strength she never knew she had, and he’s about to learn that facing his ghosts may be the only way to save not only himself but the woman he now loves.

After reading Sinful Scot, book one in the Highlanders Through Time series, I was convinced Deirdre Irvine was a scheming traitor who had betrayed both her country and her sister. Imagine my surprise when I discovered she was the heroine of book three! Clearly, matters were not as they appeared in regards to her culpability. Or, so I hoped. As for Reikart, he is certainly more than he appears at first glance. Even his family is unaware of the magnitude of the immense burden of guilt he carries and how it continues to impact his life. Only a woman with Deirdre's strength and determination could have any chance of breaking through his barriers to release his guilt and bring hope - and love - to his future. But even that may not be enough to see these two through to a happily ever after.

I loved this book. It's my favorite of the series so far. The first two books of the series were filled with a lot of danger and action (which I enjoy) but, while this one has its share of that, the primary focus is on the characters, their individual growth, and the evolution of their relationships. Both of them have heartbreaking, emotional wounds that have not healed. Deirdre is determined to earn back her sister's love and trust while Reikart is determined to never open his heart to love again. Both also have a burning desire for the other that cannot be quenched. And, both will do whatever is necessary to keep the other safe. They broke my heart, then filled that same heart with joy. I couldn't get enough of them.

While there's an abundance of deep emotion in this story (parts were heartbreaking and, yes, there were tears), Johnstone maintains that emotional depth without allowing it to become too dark by lightening the story with well-placed humor and some delicious sizzle. I especially enjoyed the snappy banter between Deirdre and Reikart, and the unabashed matchmaking going on at the hands of Reikart's mother and aunt, and Deirdre's sister (now also Reikart's sister-in-law). And, as always, the historical facts and figures interwoven throughout add an enjoyable realism to the tale.

I've loved getting to know these brothers, each so different from the others yet all undeniably bound to one another by the love and loyalty of family. I'm already sad about the prospect of saying goodbye to them and yet also eagerly anticipating the fourth, and final, chapter of their journey, youngest brother Ian's story, in book four: Scandalous Scot.

If you enjoy time-travel romances, you'll want to be sure this series is on your must-read list. If you haven't discovered time-travel yet, the Highlanders Through Time series is a great place to begin. I recommend reading the books in order: Sinful Scot, Sexy Scot, Seductive Scot, and (coming May 19) Scandalous Scot.

Have you read any of the books in this series yet?

If you could time travel, where would you go?

One randomly chosen person who posts a comment before 11:00 PM, April 24, will receive an e-book copy of Seductive Scot.