Review - - Say Yes to the Duke


Say Yes to the Duke
by Eloisa James
The Wildes of Lindow Castle - Book 5
Publisher: Avon
Release Date: May 19, 2020
Reviewed by PJ 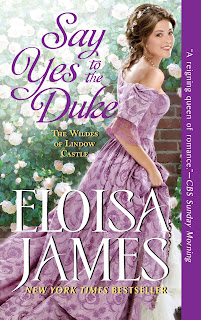 A shy wallflower meets her dream man--or does she?--in the next book in New York Times bestselling author Eloisa James' Wildes of Lindow series.
Miss Viola Astley is so painfully shy that she’s horrified by the mere idea of dancing with a stranger; her upcoming London debut feels like a nightmare.
So she’s overjoyed to meet handsome, quiet vicar with no interest in polite society — but just when she catches his attention, her reputation is compromised by a duke.
Devin Lucas Augustus Elstan, Duke of Wynter, will stop at nothing to marry Viola, including marrying a woman whom he believes to be in love with another man.
A vicar, no less.
Devin knows he’s no saint, but he’s used to conquest, and he’s determined to win Viola’s heart.
Viola has already said Yes to his proposal, but now he wants her unruly heart…and he won’t accept No for an answer.

There are times I'm in the mood for a book filled with conflict and angst; a book that takes me on an emotional roller coaster ride. But, other times, I want a book that's filled with witty banter, a boisterous and loving family, flirtatious fun, sizzling desire, and heart-tugging romance between two characters who had me in their corner, urging them on to a happily ever after. In short, a book that's fun, that makes me grin, laugh, and sigh - a book that makes me happy. This is one of those books.

Even though I've read all of the books in this series, I really had no idea what to expect of Viola other than knowing she's shy. She is, but she's also so much more. I love her growth throughout the story, how she gradually gains confidence and slowly begins to embrace the strength and power within her, as well as her Wilde side. I love her quiet determination and caring nature. And I adore how she takes Devin to task from their first meeting. She is exactly what he needs in his life, as he is the perfect mate for her. I love his pursuit of her; how he embraces his (well-hidden) romantic side to woo her. Their playfulness with one another is such a joy. It's fun to watch their relationship deepen as they explore the passion between them, gradually opening their hearts to one another and the love that continues to grow between them. Their chemistry is off the charts and, let me just say, I'll never view a china closet in the same way again!

The secondary cast of characters in this book are a delightful accompaniment to the journey. In addition to various members of the Wilde family and Devin's family, there's a "pretty" vicar who not only plays an important role in Devin's and Viola's relationship but also finds himself caught in a romantic tangle of his own.

Say Yes to the Duke is a witty, feel-good, historical romance that checked all of my happy boxes. It's exactly what I needed, had me grinning pretty much from beginning to end, and features a hero who made me sigh and a heroine who is one of my all-time Eloisa James favorites. I highly recommend it.

Though this is the fifth book in the Wildes of Lindow Castle series and does feature some characters from previous books, readers new to the series should be able to fully enjoy this story without having read the others first. Though I do recommend those too.

Have you read any of the Wildes of Lindow Castle books yet? Have a favorite?

Who are some of your favorite romance families?