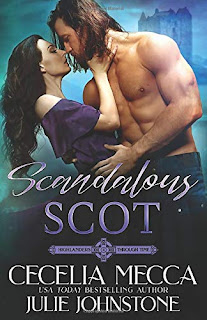 Ian McCaim is used to following in his brother’s footsteps—even if it takes him to medieval Scotland. When he finally completes the time travel ritual, the magic lands him next to Hightower Castle and his big brother, Greyson, is there to greet him. As soon as the rest of the family returns to Hightower, the McCaims can finally go home, but in the meantime, Greyson has a task for Ian: charm the man whose son is fated to play a pivotal role in the Scottish War of Independence. An easy task—or at least it would be if Ian were capable of behaving himself.
After a lifetime of having endured stares, Màiri Kelbrue is used to being looked at—the strange mark on her cheek ensures it. So when the handsome man she encounters near her father’s loch gawks at her, she assumes the worst. Until he kisses her. The passion she feels for the stranger stuns her—she’d thought to marry her childhood friend, but never once did he make her feel like this. And then the unimaginable happens—when the stranger escorts her home, he tells her very religious father exactly what happened between them.
Within a sennight, Ian and Màiri are rushed to the altar. Ian plans to return to the future sooner rather than later, but the bride he didn’t ask for soon becomes the only thing he wants. What will he do when it’s time to go home?

I have thoroughly enjoyed this four-book journey through time brought to readers by authors Cecilia Mecca and Julie Johnstone. Both Mecca and Johnstone have a gift for immersing readers into medieval Scotland with a seamless blend of fact and fiction, intermingling real people with characters of their own creation, and giving readers a breath-stealing and realistic reading experience.

Book four, Scandalous Scot, brings us the story of youngest McCaim brother, Ian, as well as the conclusion of the series. Like his older brothers before him, Ian has time traveled back to medieval Scotland in an attempt to locate his missing mother, reunite with his brothers, and bring his family back to present-day New Orleans. And, also like his brothers before him, a medieval woman has added a detour to his journey.

This book was a bit different from the others in that it not only tells Ian's individual story but also wraps up the series. I enjoyed Ian's growth throughout his journey. He's probably the most emotionally transparent of the brothers, struggling to find his place without disappointing his parents or siblings. I enjoyed his interactions with his brothers and watching him come into his own, though he sure took his good sweet time to do it. And, I really enjoyed the culmination of the brothers' journey and the resolution of their mother's disappearance, along with the final outcome of their father's health crisis. The ending had tears of happiness flowing and me reaching for tissues. Many tissues.

What I wanted more of in this book was Ian's and Mairi's romantic journey. I liked Mairi a lot. She's a sympathetic character with difficult decisions to make and my heart ached for her. I enjoyed how her relationship with her new sister-in-law helps her gain confidence in herself and I cheered for her to find her happy ending. What I had a bit of difficulty with was her relationship with Ian. These two find themselves married at lightning speed, within a few days of first meeting, in a marriage neither wants. They are literal strangers, and not only because they're from different centuries. They need time together to learn about one another, for feelings to develop. And I needed that time to believe in them. There's so much going on within this book in regards to family matters (which I loved) that at times it feels like their romance gets pushed to the back burner. I needed more attention given to these two, more of them together on the page, more development of their relationship, and more depth of emotion. Because of that, while I enjoyed their happily ever after I wasn't as fully invested in them as I was in the other three couples in the series. Others may feel differently.

While I may have wanted more in regards to the romantic relationship in this final book, the overall journey and conclusion to the McCaim family saga checked my happy boxes and left me a very satisfied reader. I enthusiastically recommend Cecilia Mecca's and Julie Johnstone's time-traveling McCaim brothers - Highlanders Through Time.