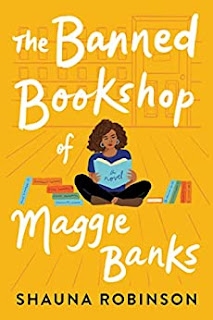 When Maggie Banks arrives in Bell River to run her best friend's struggling bookstore, she expects to sell bestsellers to her small-town clientele. But running a bookstore in a town with a famously bookish history isn't easy. Bell River's literary society insists on keeping the bookstore stuck in the past, and Maggie is banned from selling anything written this century. So, when a series of mishaps suddenly tip the bookstore toward ruin, Maggie will have to get creative to keep the shop afloat.

And in Maggie's world, book rules are made to be broken.

To help save the store, Maggie starts an underground book club, running a series of events celebrating the books readers actually love. But keeping the club quiet, selling forbidden books, and dodging the literary society is nearly impossible. Especially when Maggie unearths a town secret that could upend everything.

Maggie will have to decide what's more important: the books that formed a small town's history, or the stories poised to change it all.

Shauna Robinson’s The Banned Bookshop of Maggie Banks is a delightful romance that’s also about a woman finding her place. The story opens with Maggie’s arrival in the town of Bell River. She’s there take over her friend Rochelle’s bookstore when Rochelle goes on maternity leave. The town’s claim to fame is that the writer Edward Bell was from there. The town is named after him (a change from its original name), and there are statues—yes, plural. Tourists come to learn about him and to see where he lived and worked. There’s so much about him, though, that Maggie has a niggling feeling that this is a little cult-like.

It's more cult-like than she knows. Ralph Bell, who operates the museum dedicated to Bell, owns majority shares in many of the town’s businesses, including Rochelle’s bookshop, and closely controls how they’re run. For example, the bookshop cannot sell any books other than those by Edward Bell and acclaimed classics published before his death in 1968. The nearest place to find popular fiction is the next town over.

Ralph even has an employee, Malcolm, keep tabs on the businesses to be sure they comply with his rules. Unfortunately, Maggie doesn’t hold Edward Bell in the same esteem as Ralph and his cohorts, and Malcolm happens upon Maggie and Rochelle joking about him. He cautions them and says he won’t report it this time, but this can’t happen again. He’s clearly torn between doing is job and being reasonable, which makes him sympathetic. He becomes more so when we learn his reasons for staying in this job.

Unfortunately, Maggie runs afoul of Ralph with serious consequences for the bookstore. She’s desperate to keep Rochelle, who is already on leave because of pregnancy complications, from finding out about Ralph’s new restrictions. A local romance author, Evelyn, stops in to see if the changes at the store leave room for more popular fiction. Selling anything not sanctioned by Ralph will be disastrous if he finds out, but the store can’t survive under his new orders.

One thing leads to another, and Maggie and Evelyn devise a plan to do a mashup of Moby Dick and romance (along the lines of Pride and Prejudice and Zombies)—but secretly, working with a very small audience. Maggie’s trip to a local book lovers convention turns unexpectedly complicated when Malcolm shows up. And more complicated yet when they discover that they like each other and want to spur each other’s interest in different kinds of books. In the back of Maggie’s mind, though, is the awareness that she absolutely cannot let Malcolm find out what she’s doing to bring in revenue in the store.

At the semi-secret gathering, Evelyn’s reading of her mashup, Hunting for Dick, is a huge success. It also brings in people who convince Maggie there’s a real demand locally for popular fiction and for other such events. If she can meet that demand, that will solve the store’s revenue problems. So she begins selling books banned by Ralph, a choice that gives the book its title.

Maggie is likeable despite not having found her niche in life. She knows what kind of job she doesn’t want—something restrictive, the position her sister arranged for her as an assistant at a brokerage firm. But she doesn’t know what she actually wants. She’s still trying, though, and is happy to help her friend and take that time to try to figure out a next step. Although she makes choices she knows are risky, she’s doing it to protect her friend from stress and keep revenue up.

As is often the case, one deception leads to another and another, increasing the secrets Maggie has to keep from Malcolm as their relationship deepens. Matters come to a head when Ralph makes a business choice that threatens a bookstore regular and all the businesses he controls. Maggie rallies the community to resist. The trouble that comes crashing down is predictable, but Robinson leads the reader to understand why Maggie and her friends don’t see it that way.

Their salvation comes from an unexpected quarter, and I don’t want to spoil it. So I’ll simply say it was very satisfying. The foundation for it was laid in a way that made it believable. Even better, the resolution leads Maggie to see the solution to her personal issues and shakes Malcolm out of his rut.

Although I love the characters and enjoyed the plot, I have two issues with the worldbuilding. The first is the description of Edward Bell as the founder of feminism. Maggie makes it plain early that she doesn’t see where this is coming from, which is fine. My problem lies in the fact that there are works considered feminist published well before this Edward Bell’s work. Little Women, while it’s a children’s novel, is considered a feminist book. So are Ibsen’s The Doll’s House and Charlotte Perkins Gilman’s The Yellow Wallpaper. Virginia Woolf and Dorothy L. Sayers also wrote about feminist themes. All these authors were published before the 1930s, when the story world’s Edward Bell wrote the purportedly feminist The First Dollar.

When Maggie and Malcolm discuss the bookstore and its stock, he laments that Ralph’s sales policy keeps the inventory very white except for slave narratives because there were no Black authors on the New York Times bestseller list until 1970. Bestseller status, however, does not convey classic status, and there were Black authors published before Ralph’s 1968 cutoff whose books have come to be considered classics. Ralph Ellison’s The Invisible Man was published in 1952. Zora Neale Hurston’s Their Eyes Were Watching God came out in 1937. James Baldwin, Langston Hughes, and Richard Wright were all published before 1968.

Dismissing these earlier works by feminist and Black authors yanked me out of the story each time. It made me stop and go, “Wait. What?” I realize this is fiction, but it’s set in this world. So it would seem to me to have the same basic history and conventions and literature as this world. But that may be just me. Other readers may not be aware of these books or, if they are aware, care that they’ve been world-built out of existence.

Maggie and Evelyn have a brief conversation about who gets to decide what’s a classic. Maybe the author had that in mind when she made her story choices. As I said, while these choices seriously did not work for me, they may be fine with others.

The story moves at a good pace. The characters are well drawn and likeable. The supporting characters also have their moments to shine, and the mashups at the readings are delightful. Weighing all of that against being really bothered by the dismissal of the earlier authors for worldbuilding and knowing other readers may not mind so much, I settled on 4 stars. I do recommend the book because it was fun despite my other issues.