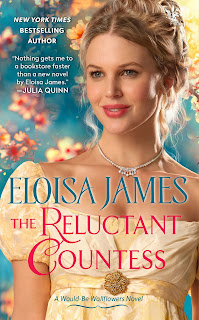 Giles Renwick, Earl of Lilford, has never made a fool of himself over a woman—until he meets Lady Yasmin Régnier. Yasmin is ineligible for his attentions in every way: not as a wife, certainly not as a mistress (she is a lady!), nor even as a friend, since they vehemently dislike each other.  Her gowns are too low, and her skirts are dampened to cling to admittedly lovely thighs. She loves to gossip—and giggle.

She isn’t dignified, or polite, or even truly British, given that her father’s French ancestry clearly predominated. Not to mention the fact that her mother had been one of Napoleon’s mistresses, a fact she makes no effort to hide.

And what will he do if she says yes?

Yasmin turned out to be a heroine who won both my affection and support. I enjoyed her determination to be true to herself and admired her ability to continue moving forward in the face of much negativity. Each time she was confronted by those who looked down upon her, she chose to smile in response to their pettiness, to choose kindness as a counterbalance to their cruelty. Needless to say, I was in her corner cheering her on the entire way. I loved her relationship with her English grandfather (one of my favorite secondary characters) as well as her best friend, Cleo (heroine of How to Be a Wallflower).

Giles was a harder sell. He's a product of his class, as well as his family and that's reflected in his attitude toward Yasmin. While he desires her, and comes to begrudgingly admire her, he views her as inappropriate, not worthy of being his countess even though she is a lady. That's not a deal breaker for me as James uses it to create conflict and give his character an opportunity to evolve. My issues with him occur when - in my opinion - he crosses the line in holding her responsible for the actions of others (her very visual response is pure gold). Kudos to the author for crafting this story - and character - in a way that allowed me to be happy for the HEA he and Yasmin ultimately share because halfway through I wasn't sure that was possible. Because of his apologetic accountability for the way he had previously behaved, because I believed he was truly repentant and had grown into a man worthy of Yasmin, and because he finally put her first, I was able to happily celebrate their love.

If you like historical romance with wit, humor, well-developed characters, hard-won happy endings, a wonderful supporting cast, plus a self-centered, despicable (female) villain, give this book a go. I enjoyed it.