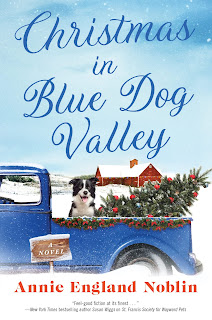 At first Goldie is nothing more than a fish out of water, with few clients and few friends. But after a less than pleasant encounter with a man whose dog is suffering from a possibly fatal case of bloat, she’s finally earning the trust and goodwill from her fellow Blue Dog Valley citizens. Her clientele grows to include the many farm animals in the town, including a horse named Large Marge, a cape-wearing therapy alpaca, and a yardful of sweater-wearing goats. Add in Kevin, the “worst sheepdog in Blue Dog Valley,” and a Sphinx cat named Airport, and Goldie is having the best time a vet can have. . . aside from the annoying attractive town grump, Cohen, who seems intent on making sure she always feels like an outsider.

With her newfound goodwill, Goldie comes up with an idea to reinvigorate the once flourishing Blue Dog Valley: a Christmas carnival. A petting zoo, pictures with Santa, a baking contest, what more could they want? After only some brief resistance from Cohen and his father, they begin the great plan to reinvigorate Blue Dog Valley.

Will Christmas be enough to salvage this dying town—and be enough to bring Goldie closer to a certain grumpy man?

I love a good fish out of water story and, boy howdy, does this one fit the bill. First off, Goldie is so far outside her comfort zone that, like some Blue Dog Valley residents, I wasn't sure she'd last two weeks. Especially after she stepped out of the airport into frigid temperatures, endured a two-hour, silent ride in a pickup truck with her less than enthusiastic (though very good looking) driver, met her terse, unwelcoming co-worker who informed Goldie that nobody trusted her and all appointments had been cancelled, saw the tiny cabin where she'd be living, and after falling asleep in a kitchen chair awoke to a cat on her head and a huge dog in front of her fireplace. And that was only the first day! But then she discovered Ruby's diner and the best cinnamon rolls in Wisconsin and that outweighed many, many negatives. Like Goldie, I slowly fell in love with the small, Christmas-loving town of Blue Dog Valley and her quirky citizens. And like those citizens, I came to love Goldie as well. Who says you can't start over at forty?

Noblin is a wonderful storyteller, bringing this tale to life with humor, poignant emotion, sassy banter, and well-developed characters. She captures the vibe of the upper Midwest and the flow of a small town on the brink of collapse impeccably. By the time I reached the final page, I felt as if I knew each of the characters, no matter how small a part they played in the overall story. And that goes for both two-legged and four-legged ones! I was cheering for Blue Dog Valley to succeed. I was ready to decorate my house to the max. I was rooting for Cohen to wake up and realize the happiness that was within his grasp. I wanted to spend the day with Kevin, Airport, Alice and the rest of the Blue Dog Valley animals. And I was craving cinnamon rolls. Hot, sweet, chewy cinnamon rolls.

I would classify this as women's fiction, or perhaps contemporary fiction (think Hallmark Christmas movie), though there is a romantic element and a happy ending. The primary focus though is on Goldie, her interactions with everyone in town, her growth, her second chapter, finding herself, finding her happiness and, quite possibly, her future.

Christmas in Blue Dog Valley is a fun, feel-good story that's sure to brighten your holiday reading pleasure. It has my enthusiastic recommendation.

Blue Dog Valley goes all out with Christmas decorations and activities. What does your town do to celebrate?

One randomly chosen person who posts a comment before 11:00 PM, December 16 will receive a print copy of Christmas in Blue Dog Valley.