Review & Giveaway - - Down in Flames 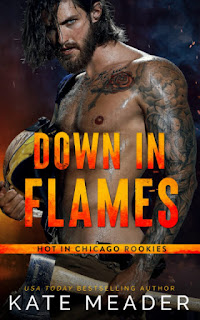 It was supposed to be a random hookup.

At a crossroads, my life a hot mess, I swiped right on the guy with the washboard abs and the tree-trunk thighs. His handle was Holt (yeah, really) but as soon as he opened the door, I recognized him: Hudson Grey, the hottest prospect in pro-hockey and apparently, secretly playing for my team. Not mind-blowing enough? He needed someone to punch his V-card, and I was only too happy to volunteer as tribute . . .

Then he ghosted me when it got to be too much.

A year later, my life is back on track and I’m a candidate firefighter at legendary Engine 6. While I might be new to the Chicago Fire Department, I’m a veteran in the game of steamy hookups. My No. 1 rule? No newbies. Except now Hudson has been traded to my hometown team, the Chicago Rebels, and he’s out, proud, and ready to date. And he wants my help introducing him to the local gay scene.

My messy past means I’m the worst guy to be mentoring the shy, sexy jock. But neither can I stand by and watch while others touch the man who already feels like mine.

I might have been his first, but I’m about to learn that the new guy has even more to teach me about hunger, hope, and falling hard.

What can I say about Kate Meader's writing that I haven't already? She continues to up her game with each book she releases and is, in my opinion, one of the best authors out there writing in the contemporary romance genre. The majority of her books are male/female couples but occasionally she'll write a male/male romance that stirs my emotions like no other. This is one of those stories.
Jude and Hudson are both incredibly complex, well-developed, relatable characters. I loved how they both evolved over the course of their story and how the dynamic of their relationship shifted in accordance with that evolution. On the surface, Hudson seems to be the one who grows the most - from the shy, awkward, closeted virgin to the strong, confident, openly gay hockey player willing to fight for love - but, in actuality, it's Jude who I felt grew the most. My heart ached for him as his cocky, confident persona began to crumble, revealing the mistakes of his past and the vulnerable core so well hidden, bringing me to tears more than once.
For those of you who like your physical expressions to be on the mild side, this book may not be for you. The sex is steamy and frequent, but also incredibly tender, and used effectively to move this story along. I loved how hot these two were for one another. If you enjoy steam between two consenting adults that's layered with a whole boatload of emotion, this book gives you both...and then some. Jude and Hudson connect on so many levels. I enjoyed how full-bodied their relationship is, the quality of the time they spend talking about a plethora of topics, how they take care of each other, support one another, tease, laugh, and cry with one another.
As is typical of a Meader book, there's also a lot of humor balancing the emotion and a richly depicted secondary cast of characters. I'll never look at mini-golf the same way again. Hudson's meddling hockey teammates are pure gold (I can't get enough of them), as are Jude's firefighter pals. Then there's Hudson's parents and how they treat Jude. My heart melted and there may have been tears.
I don't think I could have pulled any harder for these two opposite, but perfect for one another, men to accept the love they didn't always think they deserved. From their awkwardly sweet introduction to their final, heartfelt declarations, they personified the truth that love is love is love and that love is something we all deserve. This one gets my enthusiastic, heartfelt recommendation.
Note: The initial meeting between Jude and Hudson plays out in the short prequel, White-Hot Hookup, which is currently available to download at no charge. I recommend reading it before beginning Down in Flames.
~~~~~~~~~~
a Rafflecopter giveaway
GOODREADS LINK: https://www.goodreads.com/book/show/63142010-down-in-flamesPURCHASE LINKS

Originally from Ireland, USA Today bestselling author Kate Meader cut her romance reader teeth on Maeve Binchy and Jilly Cooper novels, with some Harlequins thrown in for variety. Give her tales about brooding mill owners, oversexed equestrians, and men who can rock an apron, fire hose, or a hockey stick, and she’s there. Now based in Chicago, she writes sexy contemporary romance with big-hearted guys and strong heroines - and heroes - who can match their men quip for quip.