Review - - Faking it With the Green Beret 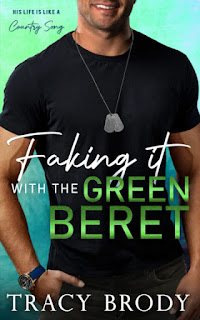 Green Beret Captain “Big John” Bryson returns from deployment to learn his girlfriend cheated and his dog died. Turns out, his ex lied and dumped his beloved mutt, Boss, at the shelter. Forget the ex, John just wants his dog back.

An abuse survivor, Elizabeth Carroll is singing a happier tune without a man in her life. She has her work as a counselor and The Oasis, a trio of tiny homes on her property where abused women can get a fresh start. She also has her rescue dog—or did—until his former owner wants him back. After John intervenes to protect one of her residents, Elizabeth offers him and Boss housing at The Oasis. But who will protect Elizabeth’s heart from the charms of the off-key singing, 6’5” teddy bear of a soldier?

Fighting for the love John desperately wanted all his life has given him more battle scars than his dangerous missions. He and Elizabeth could be an opposites-attract love story, if only John can break through the guarded beauty’s defenses. If he can’t earn her trust and heal her invisible wounds, their unlikely duet will end on a bad note. With Boss’s help, can they create the perfect harmony to give them the future they’ve both dreamed of?

Tracy Brody blends laugh-out-loud humor and sweet romance with the emotional depth of heartache, past abuse, and hopeful healing in this new contemporary romcom that had me laughing, shedding a few tears, and sighing with satisfaction when the final page was turned.

John can sing off-key to me any old time. I adored him. In this character, Brody has created a battle-tested warrior with a marshmallow center. He's tough when needed - a protector - but also gentle and kind when the occasion calls for it. The care he exhibits with the women at The Oasis, his patience with Elizabeth, his devotion to duty and honor, and his love for his dog would have sealed the deal for me...even before he started serenading me off-key. And speaking of his dog, Boss not only stole the hearts of all the characters in the book, and mine, he also stole every scene in which he appeared.

Elizabeth is a complex character with a traumatic past (see below for the author's note) who devotes herself to helping other women who have experienced similar situations. I admired her courage to break away from those who had hurt her and embark upon a healing path. She and John are so good together. The author leads them on a gradual journey to friendship, trust, and eventually a deeper, emotional relationship. I loved the humor between them while appreciating the fine line they walked when feelings began to deepen. The sensitivity given to her fear was commendable and, again, in those situations, John's actions and attitude were all I could have hoped for.

Kudos to Brody for crafting a story that, although it deals with difficult subject matter and is heart-wrenching at times, addresses those issues head-on while also maintaining it's central focus of humor, heart, healing, and hope. I give this one my enthusiastic recommendation.

One additional note. Each chapter in this book begins with a song title (and artist) that sets the tone for what's to come. I have no idea how long it took for the author to research and choose these titles but they are brilliant...and kept me humming throughout the book.

Note from author in front of book

"This is a romantic comedy book; however, it also deals with the sensitive subjects of physical and sexual abuse. Elizabeth is an abuse survivor and works with other women who've left abusive situations. While the abuse is not shown on the page, it is discussed in the book and is part of what Elizabeth has to overcome through counseling, EMDR therapy, and with encouragement from John.

The intent is to show women supporting one another and that there is help and hope for healing. Should the idea of a character sharing abuse in their past be a trigger for you, this may not be the book for you - at least not at this time. I do hope you will get to a place of happiness, joy, and strength."