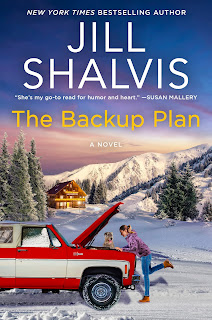 When Alice receives a call about an unexpected windfall, she’s stunned to learn the gift is a falling-apart-at-the-seams old Wild West B&B she once considered home—and she’s inherited it along with two strangers. Except they weren’t always strangers. Once upon a time, they were friends. One is her ex-BFF Lauren. The other is Knox, the only guy to ever break her heart, all while never even knowing she existed.

It turns out their lives are unknowingly entangled because they once separately helped the same woman without expecting anything in return. Years later, Alice, Lauren, and Knox are broken in their own way, with their own history—and secrets— causing them to start out on the wrong foot with each other. But according to the will, they must renovate and be partners in the inn for one year or else lose their inheritance.

Stuck together, they make a list of rules to keep the peace—rules that end up doing the opposite, but by some miracle they find what they didn’t even know they were looking for—acceptance, true friendship, and in a case (or two!), true love.

Once again, Jill Shalvis has created an immersive, complex, heart-tugging story that captured my attention and my heart. These characters are fully developed, flawed, relatable, and real. Each is on an individual journey while, at the same time, all three are slowly, sometimes painfully, extending tendrils of forgiveness and hope as they begin to reconnect with one another. Once I began reading, I was hooked. There was no way I was going to be able to put this book down until I reached the final page.

Just as Shalvis's characters are complex and fully developed, so too is her choice of setting. The Lake Tahoe area is majestic, stunningly beautiful, and deceptively dangerous, all facets that are explored in intimate detail by an author who knows the area well. The pictures she paints with her words bring it all to vivid life and convince me I'm right there with her characters as they breathe in the scents, navigate the dangerous roads, and discover all they never realized they were seeking.

Sometimes, I finish a book happy for the characters who have found their happy endings. But, other times, I turn that final page feeling as if I've just spent several hours with a group of dear friends. I know them, I care about them, I want only the best for them. That's how I felt when I turned the final page of The Backup Plan. I want Knox to build me a home that's harmonious with the surrounding nature. I want to buy Lauren's book then lose myself in her words. And nobody, but nobody, touches my car except Alice! I'm fully confident that Knox, Alice, and Lauren are all living their best lives in Sunrise Cove and I want to be there for all the future happy events in their lives.

It should be noted that while The Backup Plan is the third book in the Sunrise Cove series, it is a complete standalone.