Review & Giveaway - - The Love of My Life

I first reviewed The Love of My Life by Rosie Walsh when it was released last March in hardcover. It was one of those books that reeled me in and refused to let go, keeping me eagerly flipping pages through a multitude of twists and turns until I finally finished it late into the wee hours of the night. The book has now been published in paperback so it seemed a good time to revisit my original review as well as offer a print giveaway, courtesy of the publisher. More on that at the end of the post. 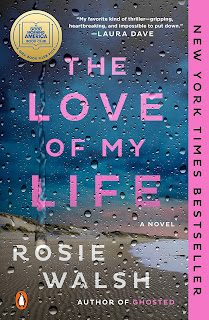 Emma loves her husband Leo and their young daughter Ruby: she’d do anything for them. But almost everything she's told them about herself is a lie.    And she might just have got away with it, if it weren’t for her husband’s job. Leo is an obituary writer; Emma a well-known marine biologist. When she suffers a serious illness, Leo copes by doing what he knows best – researching and writing about his wife’s life. But as he starts to unravel the truth, he discovers the woman he loves doesn’t really exist. Even her name isn’t real.    When the very darkest moments of Emma’s past finally emerge, she must somehow prove to Leo that she really is the woman he always thought she was . . .    But first, she must tell him about the other love of her life.
PJ's Thoughts:
I started reading this book in bed last night. It was a bit slow at first and I figured I'd try to get in a couple chapters before going to sleep. It wasn't long before the author began dropping little bits here and there that snagged my interest. Then a few more bits that gradually drew me deeper into the lives of these characters. Then the first twist that had me thinking, "Whoa! What's going on here?" By that time the first few chapters were in my rearview and I was hooked. There was no way I was going to be putting this book down until I hit the final word. It was a late night. ;-)
The Love of My Life is compelling, poignant, twisty, mysterious, suspenseful, emotional, gripping, and heartachingly real. Brilliantly plotted, with fully-developed characters who tugged at my heart, it's an intricately-woven story that kept me on my toes. Each time I thought I had figured out what was going on, there was another unexpected twist that had me gasping with surprise. It's an immersive experience that pushed my buttons in all the best ways and it never stopped surprising me, right up until the final page. When I say I couldn't put it down, I mean it. I. Could. Not. Put. It. Down.
The Love of My Life is Rosie Walsh's second published novel. I haven't read her first, Ghosted, yet but you can be sure I'll be giving it a go...along with every book she writes in the future. This is an author to watch.
Have you read Rosie Walsh yet?
What's the last book that kept you reading late into the night?
One randomly chosen person posting a comment before 11:00 PM, January 21 will receive a paperback copy of The Love of My Life.
U.S. only
Must be 18
Void where prohibited
Posted by pjpuppymom at 5:00 AM