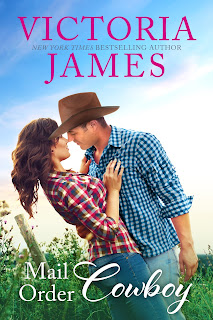 Hope Roberts has a strict No Cowboys Allowed policy. Between raising her daughter, running her business, and trying to settle into her new ranch, Hope has no room for romance—especially when it comes to cowboys. What she needs is someone to help fix her ranch. But the only person to respond to her ad is the one man Hope still blames for her husband’s death…In Wishing River, Dr. Dean Stanton is pretty much a legend. Cowboy, doctor, heir to his family’s ranching empire—everyone knows and loves him…with the exception of Hope. But Dean doesn’t trust a complete stranger to keep Hope and her daughter safe. And despite their troubled past, he’s still the best cowboy for her job.Bit by cautious bit, Hope’s little family of two is making room for the man she once thought of as her enemy. Until one day, Dean looks like the perfect exception to her “no cowboys” rule. But he’s been keeping a secret from her that could destroy their newfound family…
PJ's Thoughts:
This was my first book by Victoria James. It won't be my last. I'm a pushover for unrequited love...if there's a pathway to a happy ending. In this case there is, though it isn't a clear one by any means.
James's characters charmed me, intrigued me, and won my heart with their journey to love. I haven't read the earlier books in the series, though I plan to at my first opportunity. I never felt lost or confused by stepping into the series at book four and I thoroughly enjoyed Dean's and Hope's character paths. Having said that however, I get the impression from conversations within their group of mutual friends that perhaps their story arc has played out in the background during those first three books which leaves me with the feeling that, had I read the books in order, my emotional attachment to them would have been even deeper. I guess that's a long way of saying this book stands on its own but might possibly be even better if read in series order.
There are a lot of complicated feelings at play in this book, giving it layers that make the reading experience richer and more complex. The author weaves everything together in such a way that gives the story a realistic, relatable vibe - as if it was happening to someone I know. I appreciate the time she took with Hope and Dean, giving them the space necessary to work through the byproducts of grief and guilt. I adored Hope's daughter, Sadie, wise beyond her years yet still imbued with the wide-eyed wonder and enthusiasm of a young child. If I hadn't already been half in love with Dean, his relationship with young Sadie would have sealed the deal.
I also enjoyed how the author contrasted the dysfunction of Dean's family with the love and support of Hope's, clearly showing that money does not equal happiness and that the face families show to the world does not always equate to what's happening behind closed doors.
I don't know if Victoria James has plans to write a story for Dean's brother but I'd like to go on record as saying I'd love to read it. In the meaning, I'll be going back to the beginning to read the first three books in the Wishing River series. And adding Victoria James to my must-buy, western contemporary romance author list.
~~~~~~~~
Have you read Victoria James?
Have you read any of the Wishing River series?
How do you feel about unrequited love in the romances you read?
Posted by pjpuppymom at 4:30 AM