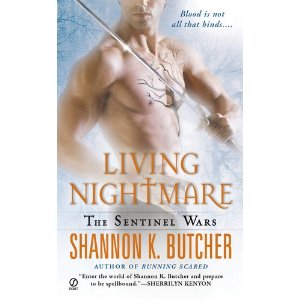 Time is running out.

If I had to pick a theme for Living Nightmare, Shannon K. Butcher’s fourth installment of The Sentinel Wars series, that would be it. Coincidentally enough, one of my favorite songs, “Time is Running Out” by Muse, played with uncommon frequency on my playlist shuffle while I was devouring this book, and I have to say that the song fit the book perfectly. Maybe it wasn’t such a coincidence after all.

The tension between Nika and Madoc has been brewing since the Finding the Lost, the second book of the series. Living Nightmare is best summed up as darkly intense. Both characters have already been introduced to the readers, and the basis of their relationship and the plot points have already, to an extent, been established. This really offers the opportunity to delve headfirst into action. Consequently, it’s not a book that you could read without reading the first three. There are multiple subplots with other characters that would leave you totally lost without the knowledge of earlier books.

When Nika was only a child, an attack by the Synestryn left her broken. Her mind shattered and inextricably linked to the Synestryn that consumed her blood. Every day is a struggle to remain in control, but with every day she gains strength. Strength she needs to find her sister, Tori, who was taken during the attack. Unfortunately for Nika, everyone believes Tori to be long dead and considers Nika crazy for insisting she’s alive. But even with her mind broken, Nika still has a psychic link to her sister. One that fades with each passing day. Time is running out to save Tori, and Nika will stop at nothing to find her.

Madoc is nearly lost. Lost to the same fate of many of the Sentinel warriors. His soul is hanging by a thread, the last leaf of his lifemark ready to fall and leave him a cruel shell of a man. He has no choice but to leave Dabyr, the Sentinel stronghold. If he stays, he risks being discovered and sentenced to death. Rightly so, as once his soul dies, he will be a danger to everyone. Especially Nika. It is safer for everyone, including himself, to stay as far away from them as possible.

Nika is the one woman he thought could save him. Madoc is the only male who can touch her without leaving excruciatingly painful marks on her body. Because of this, he briefly allowed himself the luxury of hope, but no matter how many times he touched her, his luceria remained void of any sign that they were a match. Only a compatible woman can tap into the power building within him. Power that's quickly dragging him into depths of madness.

Now there was no more hope, and even if he couldn’t be her mate, he would save her mind. While he still had some measure of honor and sanity left, he’d buy enough time to take out all the Synestryn that consumed Nika’s blood and finally release her from the years of pain and suffering she endured. After her safety is assured, he would go out in flames of glory and take the biggest nest of snarlies he could find out with him.

Of course, all his plans are tossed out the window when Nika escapes Dabyr in an attempt to prove Tori is still alive. With her life in immediate danger, Maddoc finds himself unable to stay away. Despite his constant death wish and whatever remains of his good sense, he can’t allow her to endanger herself.

Despite it all, Madoc and Nika need each other, not only to defeat their personal demons, but to save the lives of everyone they love from the increasing Synestryn threat. The question is, can Nika prove to Madoc that she’s not the fragile child he remembers and can Madoc face the true reality in front of him before time runs out?