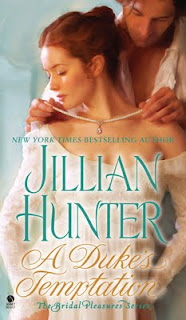 Miss Lily Boscastle is soon to be married to her long-time friend, Captain Jonathan Grace. While Lily holds great affection for Jonathan, she does not feel an all-consuming love for him. She, Jonathan, and her cousin, Chloe, a viscountess, attend a literary masquerade where the gardens have been made to look like scenes from famous fictional works, such as Romeo and Juliet, Gulliver’s Travels, and the latest craze, The Wickbury Tales by Lord Anonymous. Lily is anxious to view The Wickbury Tales scene as she’s become engrossed with the gothic novels featuring the noble Lord Wickbury, the wicked Sir Renwick Hexworthy, and the fair Juliette who comes between them. When Jonathan goes off to play cards, Lily subtly flirts with a man disguised as Don Quixote. She is introduced to him a little while later and learns he is the unconventional Duke of Gravenhurst.

Samuel St. Aldwyn, Duke of Gravenhurst, is at the masquerade because it is hosted by his partner/publisher. Plus, he knows that his presence will guarantee that everyone is entertained since he is known by his peers as a radical and supporter of unpopular causes and does nothing to hide it. He is instantly intrigued by the lovely Lily . . . especially after they share a deep discussion about The Wickbury Tales and share a breathtaking kiss. Samuel is pleased because he is the mysterious Lord Anonymous, though very few people know it. Samuel is so taken with Lily that he has a marriage contract drawn up as soon as he returns home from the masquerade. Unfortunately, he finds out the next morning that Lily’s betrothal was announced after he had left.

Two weeks before the wedding, Lily, Jonathan and a couple of friends attend a play and on the way home Lily witnesses Jonathan and his friend murder a man. When she confronts them, they deny it, and because there is no body or any evidence no one believes her. Everyone, including her family, thinks she has gone mad, thus causing a scandal. Jonathan still wants to wed her, but Lily refuses to marry a murderer, so she seeks employment as a housekeeper away from London. She secures a position and is surprised to learn that she will be working for Gravenhurst. But while there, she discovers that there is so much more to him that what society believes—and that he holds many secrets.

This is my first Jillian Hunter book and I thoroughly enjoyed it! Samuel was such a breath of fresh air. Yes, he is eccentric, but he is so much more than the clichéd “eccentric hero”. He generates false scandals about himself in order to further his secret career and to divert attention from his private life. Lily isn’t the type of woman that usually attracts Samuel and he’s smart enough to know that that was his problem—he’d been associating with the wrong kind of women. When she comes to his home, he immediately notices that she is not the same vibrant young woman he met at the masquerade. She’s been hurt and all he wants to do is return the light to her eyes and take care of her. I just love a protective hero! Lily is a straightforward, resilient heroine who takes a stand for what is right. She is accepting of and even embraces Samuel and his many quirks—and there are many. Samuel’s servants are wonderful secondary characters who are just as protective of him as he is of them. All of this combined with brilliant writing make A Duke’s Temptation a terrific historical romance that I highly recommend!