Review - - The Taming of the Wolf 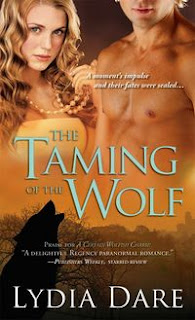 I’ve never read Lydia Dare’s books and wasn’t sure what to expect when I started The Taming of the Wolf. I’ve since learned that the first thing I should expect is no sleep! I started this book last night and, if I’d been able to keep my eyes open, probably would have finished it somewhere around 3am. I tried. I really did. I did not want to stop reading! Instead, I finished the book this morning, immediately ordered the three previous books in the series and marked my calendar for the next trilogy, which will be published in 2011.

Dashiel Thorpe, Earl of Brimsworth has been told since birth that he’s a monster, an aberration. The truth is he’s Lycan, a man who turns into a werewolf on the night of the full moon – a fact that terrifies him. He’s never known that there are others like him, never had someone to guide him, teach him how to accept the wolf within. But there are others like him and that’s how Dash ends up at the home of the Duke of Blackmoore on the night of the full moon…the same night he encounters a feisty lass from Scotland, Caitrin Macleod…the same night he can’t resist a passionate kiss…and a bite on her neck (he’s never done that before!)…a bite that, unknowingly, claims her as his mate.

It’s true that Cait Macleod has no great fondness for Lycans, even if her best friend and fellow (good) witch is married to one. Not only does she not want any part of the Lycan who is intent on pursuing her but her reaction to the handsome Sassenach frightens her. He makes her feel things. He also is the first person she’s never been able to “see.” As a seer, Cait is bombarded by peoples’ thoughts and is able to foretell their futures, which is why she avoids crowds and prefers the quiet of her Scotland home. She’s confused by the fact that she can’t “see” Dash. Not only that, but when he’s close, there’s silence. For some reason, he blocks the sounds of others from her mind. Does that mean she should run from him? Or is he the one person the universe has chosen to be by her side for a lifetime?

I enjoyed Cait and Dash so much. Their banter was a delight! They really challenge each other and bring out the best in each other. Dash broke my heart. A villain in previous books of the series, we learn the reasons for his bad behavior in this book and witness his very satisfying redemption, brought about by his love for Cait and her love for him. The reconciliation that she engineers toward the end of the story had me reaching for the tissues.

I highly recommend The Taming of the Wolf and can’t wait to read the rest of the books in this series.

Email ThisBlogThis!Share to TwitterShare to FacebookShare to Pinterest
Labels: 4.5 Star Review, Lydia Dare, PJ, Reviews, The Taming of the Wolf